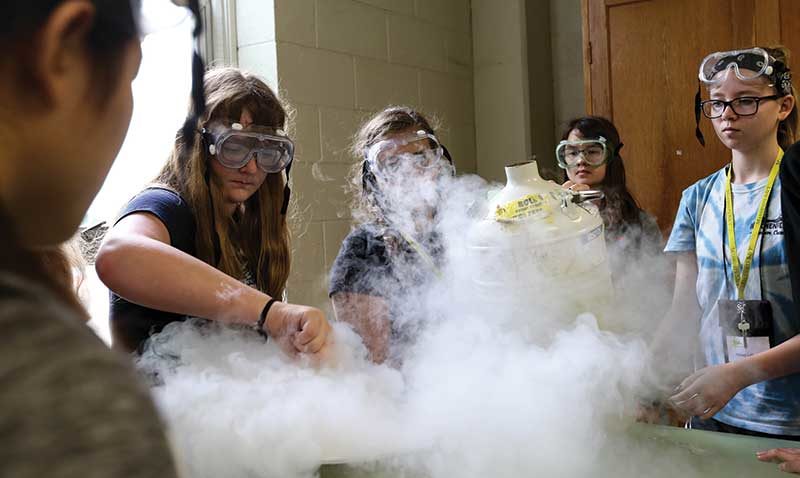 Female freshmen and sophomores in high school experience college life and learn more about career options in engineering, math and science during the university’s Summer Solutions for Girls camp. Photo by Aimee Whitmire

According to Jessica Cundiff, assistant professor of psychological science at S&T, women who consider careers in the physical sciences, technology, engineering and math (STEM) fields are deterred by stereotypes that impose barriers on the recruitment, retention and advancement of women in STEM.

With women making up less than 25 percent of the STEM work force, there has been less progress over the years in STEM than for women working in other historically male-dominated fields such as business, law, medicine, and other areas of science such as biology and psychology.

It may seem that women are freely choosing to opt out of math‑intensive STEM careers, but Cundiff says these choices are affected by implicit STEM-male stereotypes that may have been unconsciously ingrained since childhood.

Cundiff examines why these stereotypes exist and recommends ways to remove them in “Subtle Barriers and Bias in STEM: How Stereotypes Constrain Women’s STEM Participation and Career Progress,” her chapter in the February 2018 book The War on Women in the United States: Beliefs, Tactics and the Best Defenses. The book is a collection of 12 scholarly articles that examine gender roles and inequity and the impact of unintentional and purposeful efforts to undermine women’s equality in the U.S.

Cundiff says educators and practitioners can help break these stereotypes and broaden the appeal of STEM by using diverse images to represent the fields and by adapting course projects to include communal goals, which are important to women.

“Even when bias is unconscious, that does not absolve us of responsibility,” Cundiff says. “We have a responsibility to interrupt unconscious bias and minimize its effects on our behavior.”

“Even when bias is unconscious, that does not absolve us of responsibility.”