The STEM Monologues highlights hurdles faced by women in STEM 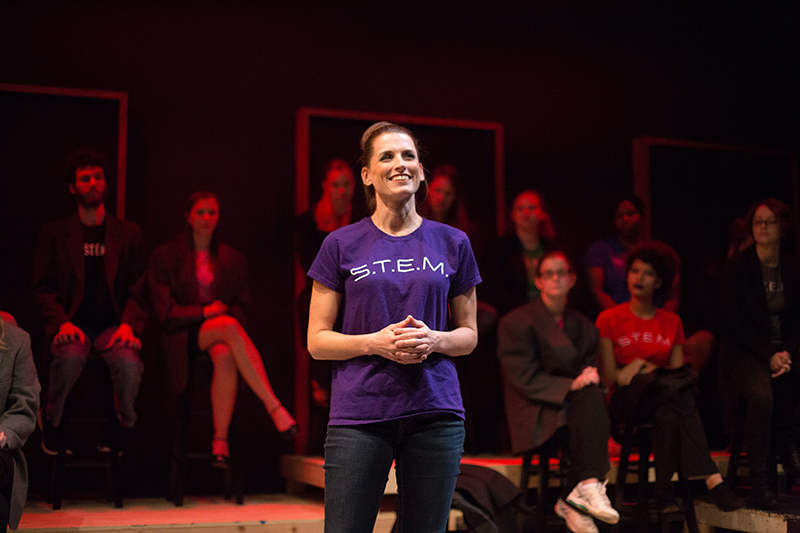 The Miner League Theatre Players perform The STEM Monologues, a play of personal stories from women in STEM fields from around the country on Monday November 6, 2017. Jesse Cureton / Missouri S&T

Last fall, Jeanne Stanley, an associate professor of theater at S&T, called out the challenges women face in the male-dominated fields of science, technology, engineering and mathematics in The STEM Monologues, a play she wrote and directed.

While more than 56 percent of college students on U.S. campuses are female, the percentages of women earning degrees in the fields collectively known as STEM hover at less than half that rate. In the workplace, women represent nearly half of the U.S. workforce but account for just 28.4 percent of American scientists and engineers, according to the National Science Foundation.

Beyond those statistics, though, are countless personal stories: withering accounts of casual discrimination; demeaning remarks that continue to sting years later; diminishing expectations by classmates, professors, coworkers and supervisors; and in the most severe cases, sexual harassment and sexual assault.

Those personal stories are at the heart of The STEM Monologues, which was performed last fall by S&T’s Miner League Theatre Players.

Stanley interviewed more than 50 people — both men and women — in Missouri and North Carolina’s Research Triangle Park. She talked to students, professors and administrators at S&T, the University of Missouri-Columbia and Northwest Missouri State University.

From those conversations, she culled firsthand accounts of 26 different monologists, who are identified in the play by only first names.

“Everyone’s story is different,” says Stanley. “Sometimes they’re funny, with a lot of laughter. Sometimes you just want to cry. Sometimes you learn things you would never have known, particularly as a male, about what women go through.”