As a kid, romance author Jamie Farrell, CpE’01, wanted to be the next great children’s author — the Beverly Cleary of her day. 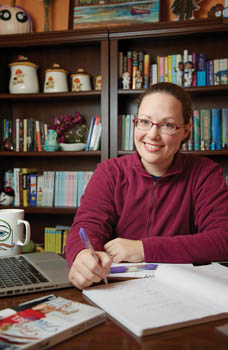 She grew up just down the road from her local library and was an avid reader with a passion for reading and writing.

“When school was out for summer, I’d ride my bike down there, check out three books, go home and read them, take them back the next day, and check out three more,” she says.

“In high school, I fell in love with math and science, so going to Rolla for a computer engineering degree was a good fit,” Farrell says. “What I hadn’t planned on was meeting and falling in love with my husband, who was in the ROTC program at the University of Minnesota.”

After graduating from S&T, she took a job as a systems engineer at 3M in St. Paul, Minn. After they married, her husband graduated and was commissioned into the Air Force, and they were sent to Pensacola, Fla. In the 15 years they’ve been married, they’ve had eight different assignments.

“Adjusting to military life was a challenge,” Farrell says. “His frequent orders made it difficult to maintain a technical career. I started writing to work out my feelings, and the bug bit me again.”

For a few years, she still worked during the day and spent her nights writing. After a reassignment to Dayton, Ohio, Farrell decided to leave the corporate world behind to focus on writing and raising their children.

“I joined Romance Writers of America, found an online chapter where I met more writers, took classes and workshops, and registered for writing conferences,” Farrell says. “I kept reading. I kept writing. I kept taking classes.”

In 2012, she sent her fourth full-length novel to agents and editors, but got over a dozen rejection letters. Editors liked her book, but what they were looking for at the time was more 50 Shades of Grey and less light-hearted romantic comedy. So, she turned to self-publishing.

Southern Fried Blues, her first published novel and the second of three books in her Officers’ Ex-Wives Club series, came out in 2013. Since then, she’s published nine other novels. Her next book, the sixth in her Misfit Brides series, is expected to come out this year. Her books get great reviews, and she has a large following of loyal fans.

Whenever she can, she writes about heroines and heroes in STEM careers. She knows, however, that her genre is not always taken seriously.

“Romance is often mocked, which is a shame, because so many of today’s romance novels are smart, empowering and uplifting,” Farrell says. “I love romance. I love the happily ever after and the emotions and knowing that the good guys always win in the end.

Farrell’s books are available at amazon.com or jamiefarrellbooks.com.