Research on the fly 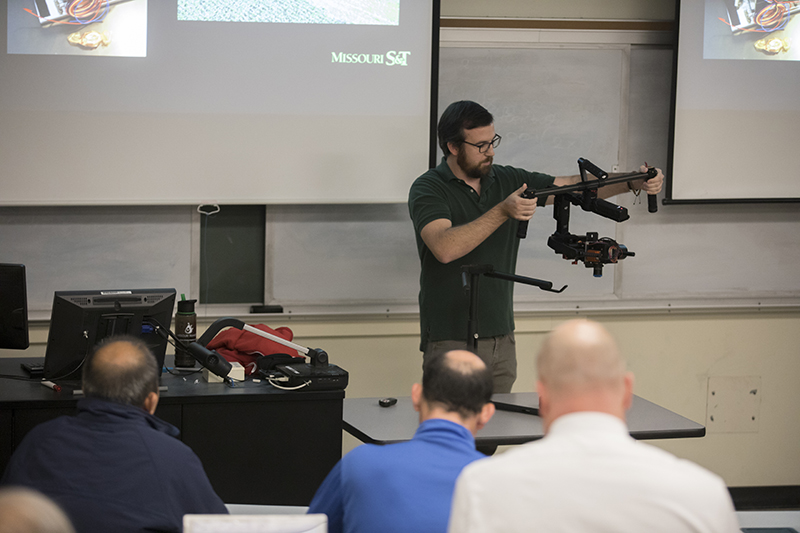 Paul Manley speaks about his work with drones donating environmental research to safely identity mine locations based on plant images. Sam O’Keefe/Missouri S&T

From U.S. Navy laboratories to battlefields in Afghanistan, researchers are lining up to explore the use of unmanned aerial vehicles to detect unexploded landmines.

At Missouri S&T, civil engineering doctoral student Paul Manley is using plant health to see if drones can be used to more safely locate such weapons of destruction.

Manley’s Ph.D. research builds on his master’s thesis work in biology at Virginia Commonwealth University. With the help of the MinerFly support team in Rolla, he conducts test flights at locations such as the University of Missouri-Columbia’s Bradford Research Center and the Southwest Research Center near Mount Vernon, Mo.

Since mine casings can degrade, leaching chemical compounds into the subsurface, those changes in soil properties can also be linked to the presence of unexploded landmines.

Using a hyperspectral camera mounted on the UAV, Manley collects images across hundreds of bands that can detect subtle changes in how plants such as corn and sorghum gain or lose water and nutrients, or how they biochemically respond to stress.

“Currently, you have people walking around the minefields, leading animals on leashes, tilling up the surface to just detonate the mines and get it over with, or they are using ground-penetrating radar to detect these in the subsurface,” he says. Another device, constructed from plastic, iron and bamboo, and powered by wind, has to be replaced each time it detects a mine. And there are over 100 million unexploded landmines across the world.

“These detection methods are really slow, and they’re expensive, and they all involve people out in the minefields doing this work, so it’s dangerous,” Manley says.

His research is part of a project called “Missouri Transect: Climate, Plants and Community.” It is funded in part through S&T’s share of a five-year, $20 million National Science Foundation grant awarded to nine institutions across the state that are teaming up to better understand climate variability and its potential agricultural, ecological and social impacts.