Lettering for a living 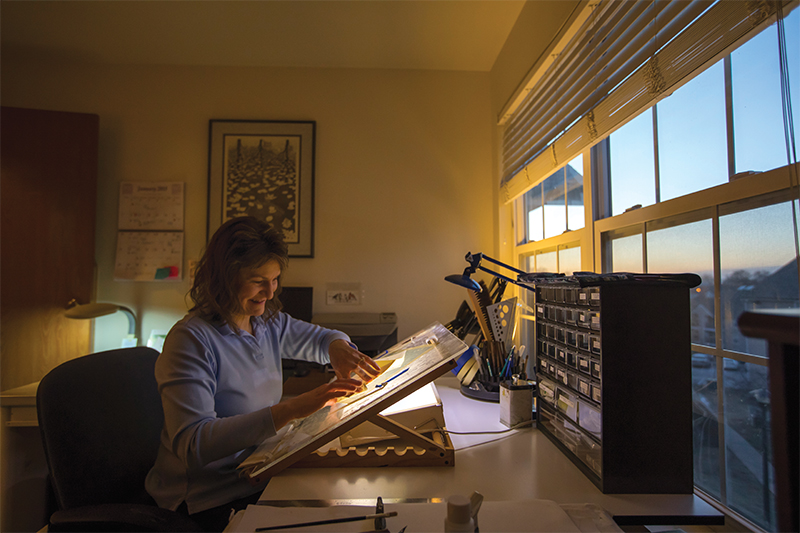 Missouri S&T alumna Cheryl Tefft is a professional calligrapher based out of her St. Louis home. Photo by Sam O’Keefe/Missouri S&T

Over the past 24 years, Cheryl Tefft, AMth’89, has hand-lettered thousands of envelopes and place cards, as well as a few basketballs and mini-coolers.

While the demand for hand-lettering has waned in the 600 years since Gutenberg rolled out his printing press, the practice is alive and well. Tefft’s company, Calligraphics, is proof of that.

“What I do has been done for centuries,” says Tefft, whose late father, Wayne Tefft, was on the S&T physics faculty. Raised by two scientists (her mother, Gloria, is a science writer and editor), Tefft planned to follow in their footsteps. “It never occurred to me that I wasn’t supposed to be a scientist,” she says.

After a year at Harvey Mudd College as a physics and math double major, she returned to Rolla to earn her degree in applied mathematics and pursue a career in actuarial science.

“It’s a five- to 10-year process to become certified as an actuary, and I burned out along the way,” says Tefft. “I also realized that my heart wasn’t in it.” After working briefly in the insurance industry, she traded probability for a long-time passion: calligraphy. She launched her business in 1993 and has had a pen in hand ever since.

Tefft’s calligraphy has been featured in publications including Martha Stewart Weddings, Brides, and Bound and Lettered. Her client list includes Macy’s, Anheuser-Busch and Tiffany & Co., as well as a roster of wedding planners and stationery designers nationwide. Business is seasonal but steady.

“I have colleagues in the calligraphy business who won’t work weddings,” says Tefft, who has encountered only one “bridezilla” in more than two decades. “She wanted a two-letter monogram with her first initial and the groom’s. I created 58 versions of that monogram.”

While perfectionism is part of Tefft’s job, so are calluses. She takes a break every hour, but some jobs bring unforeseen challenges, like the 250 invitations she addressed for a fashion industry event in New York City. “They chose a complicated calligraphic style that took three times as long as usual — 15 minutes for each envelope. It took six days to complete that job.”

Tefft works in a studio full of ink, paper and about 300 nibs (tips for quill, fountain and dip pens). As a mentor to aspiring calligraphers, she’ll teach about 160 classes this year.

When asked what makes a good calligrapher, Tefft mentions a passion for letters, the right tools, a steady hand, and “an instinct for how much is too much — to avoid the calligraphic equivalent of bed head.”