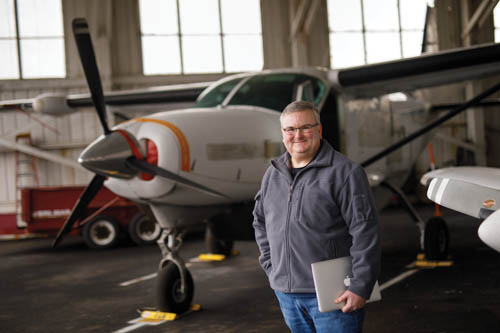 Tori L. Harris, pictured here with a plane from Remote Area Medical in Knoxville, Tenn., flew jets in the U.S. Air Force and still loves to fly as a private pilot. Photo by Steven Bridges

Knoxville, Tenn., author Tori L. Harris, ME’92, says his novels are science fiction written by an engineer for engineers, but he isn’t quite ready to call himself a professional author just yet.

Harris has been a full-time writer since spring 2015. His first novel, TFS Ingenuity: The Terran Fleet Command Saga, was published that September. Nearly three years later, he just published the fifth novel in the series.

“After my last consulting project at Oak Ridge National Lab, I was ready for a break,” Harris says. “I decided to take a few months and work on writing a story I had been kicking around for the past couple of years. Once I realized that I was actually going to be able to turn the idea into a full-blown science fiction novel, my wife and I decided I should finish it while I had the opportunity.”

The series begins in the year 2277. Mysterious data transmissions from deep space have advanced technology that allows humans to achieve faster-than-light space travel, but there’s a catch.

“We eventually learn that the Earth is just a pawn — one of a great many worlds that have their technology advanced so they may serve as a military proxy for a highly advanced alliance of hundreds of space-faring worlds,” Harris explains. “We humans, however, have other plans.”

“I mainly did it as a nod to my alma mater,” Harris says. “I was still hopeful that someone might notice. I was thrilled to hear from Dr. Miller.”

“I’m old enough to remember when the original Star Wars movie came out in theaters for the first time,” he says. “Back then, it was like nothing anyone had ever seen before, and I’m sure many people my age would agree that it’s not an exaggeration to say that it had a significant impact on our lives.”

Harris draws on his engineering education and his IT career background, with a nod to author Tom Clancy and his vividly detailed descriptions.

“He (Clancy) was always able to give his readers the impression they were actually learning something while reading his novels,” Harris says. “That’s what I aspire to do as well.”

Harris’ books are available at amazon.com or authortoriharris.com.