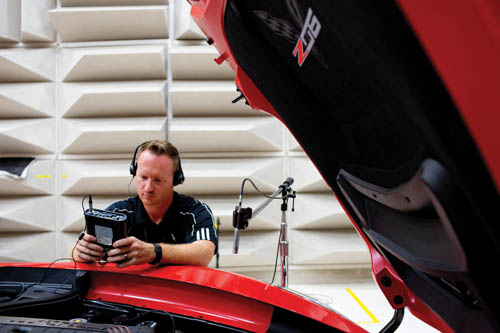 Charlie Rusher, 30, works on a 2017 Corvette Z06 in the anechoic room at the General Motors Proving Grounds in Milford, Mich.

Charlie Rusher, ME’11, a noise and vibration engineer at Chevrolet in Milford, Mich., was featured in a New York Times question-and-answer session in October 2017 that focused on his work with Corvette engines.

“I make Corvettes sound like Corvettes,” Rusher said of his work at Chevy. “I fine-tune what the engine sounds like, both inside and outside the car, at our Milford Proving Grounds testing facility. I’m the composer of a symphony, in a way.”

Rusher got his start at Chevrolet while he was still a student at Missouri S&T. He had two separate internships at the company’s testing facility and at its technical center. He passed his six-year work anniversary in January.

To produce the distinct sound that a Corvette makes, Rusher says that his team places microphones all around the car for recording.

“I manually adjust pipes in the exhaust system and record engine sounds digitally and adjust them. The sound is a combination of the engine and exhaust system outputs, and there needs to be a balance between the two.”

It is no surprise that Rusher ended up in the automotive profession. He says that he has liked mechanical things since he was a kid.

“As a teenager, I attended stock car races with my best friend, who raced on dirt tracks. I also helped him work on his car. I loved being around that culture. And at 16, I got my license and my first truck.”