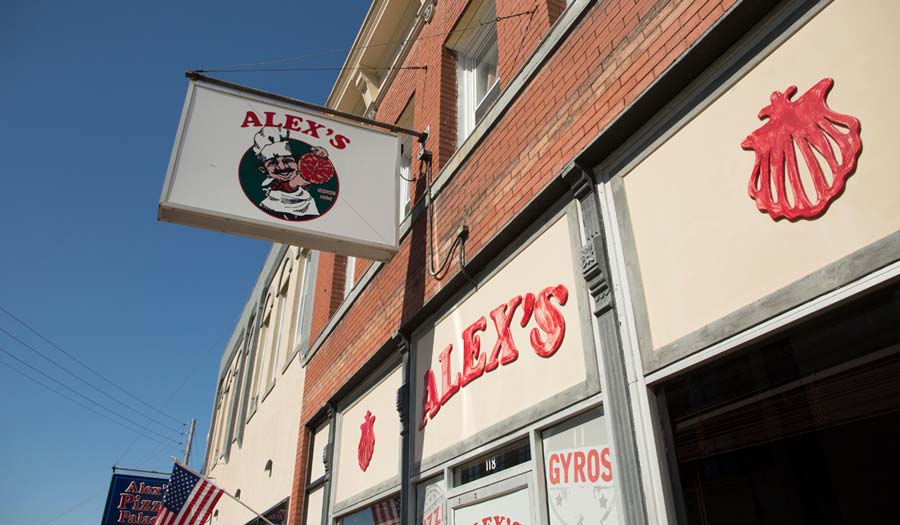 We asked about your favorite place to eat, and boy did you respond. It was such an overwhelming response that Larry Gragg, author of Missouri S&T’s sesquicentennial history book, was inspired to write about it.

Regardless of the decade they attended, alumni most often identified Alex’s Pizza as their favorite restaurant in response to our recent Q&A. However, they identified 26 other places, including eating clubs, they enjoyed.

Most alumni, because they had little money as undergraduates, recalled inexpensive places, most often pizza restaurants and burger places. Ted Becker, ME’69, remembers venturing to Ku Ku Burgers where the inexpensive food was not particularly good, but “what hungry young man has a discriminating palate?”

There were specialty places. For cold beer and hard-boiled eggs, it was the Top Hat Lounge. For south-of-the-border food, it was La Posada. For cheese balls, it was Alex’s. For the best burnt ends, it was Johnny’s Smoke Stak. For a date night, it was Gordoz.

For those seeking fancier meals, the Houston House in Newburg often beckoned. Wick Doll, ChE’65, especially remembered “rolls right out of the oven” served with homemade apple-butter. Even the ice cream there was homemade. Doll recalls walking to Newburg along the Frisco rail line, having a meal and then catching the train back to Rolla.

Alumni judged Zeno’s Steakhouse, however, as the best destination for upscale dining. There, Willis Wilson, CE’73, remembered one always got “great food and great service!” Hardy Pottinger, EE’66, “didn’t realize just how good the steaks were until” he dined “at a ‘famous’ steak joint in Washington, D.C.,  Zeno’s won hands down.”

In the end, with over half of those who responded selecting it, Alex’s emerged as the clear favorite. It was such a special place that one couple even announced their engagement there. So, for off-campus dining in the past five decades, it has been Alex’s, of course!