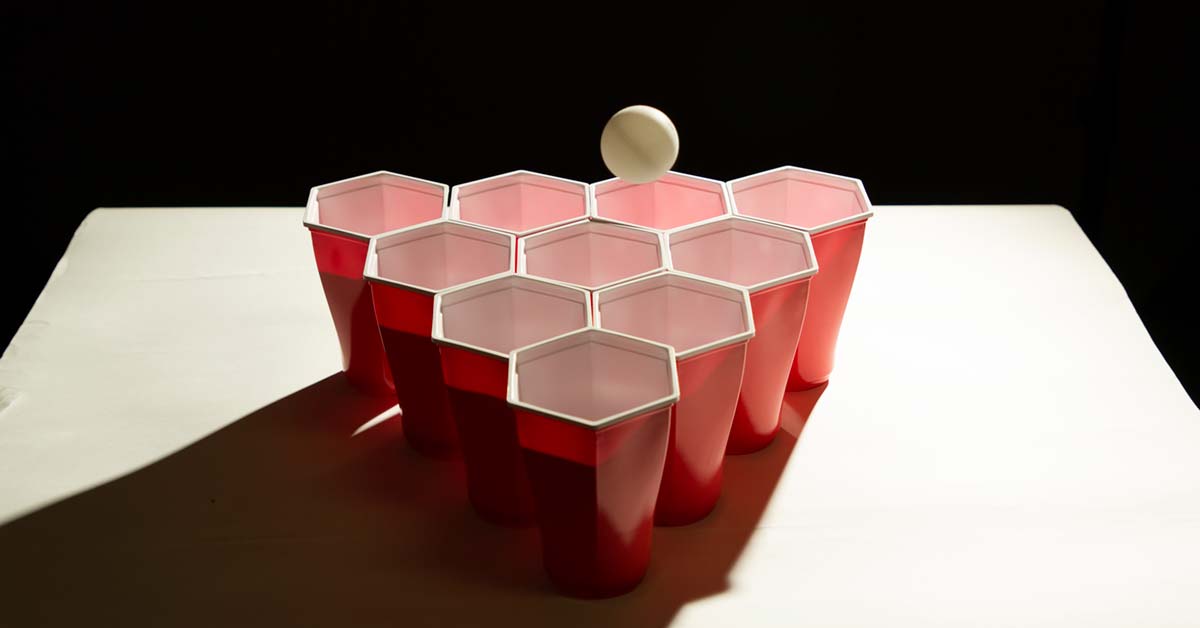 William Heimsoth, ME’11, and Aaron Attebery, ME’10, MS ME’12, designed a hexagonal beer pong cup they call the Hexcup. The cup’s honeycomb-inspired design allows for tighter “racks,” which means less space between cups. Hexcups are also top-rack dishwasher safe and have a creased coaster design that breaks the surface tension of the cup to prevent the cups from “ghosting,” or floating on slick, beer-soaked tables.

Beer pong is typically played with 16-ounce plastic cups with circular rims. Teams of two set up six or 10 cups in a “rack,” much like a rack of bowling pins, and try to land ping pong balls in the opposing team’s cups from across a table. The cups are lined as closely together as possible, but there is inherently space between circular cups.

Heimsoth and Attebery played enough beer pong as Beta Sigma Psi fraternity brothers, and had enough trouble with racking cups, that they wondered if there was a better way. They came up with the idea for the Hexcup — coincidentally — over beers at their favorite bar one night.

“One of us said, ‘Why aren’t these things hexagons?’” says Attebery, now an engineer with Black & Veatch in Overland Park, Kan. “The hexagon is the strongest shape with the least amount of material.”

Heimsoth and Attebery sat on their idea for five years as college, careers and life got in the way. Then, at a bachelor party in September 2014, they were challenged by one of their fraternity brothers to follow through on their idea.

In 2015, they created a limited liability company (LLC) with the help of Heimsoth’s wife, a certified public accountant, and launched a 60-day Kickstarter campaign. Their fundraising goal was $50,000, but after 30 days, they had only raised $4,000.

Then, in a stroke of luck, their Hexcup campaign was shared on a Facebook page called “Yup That Exists.” The post got over 10 million views, and the donations started pouring in. When all was said and done, the Kickstarter campaign had raised $108,000. The Hexcup was featured on Reddit, Buzzfeed, the CHIVE and Yahoo!

With such overwhelming exposure, Attebery and Heimsoth soon had a distribution deal with Spencer’s, a mall gift store with over 650 locations in the U.S. and Canada. For more information, visit hexcup.com.