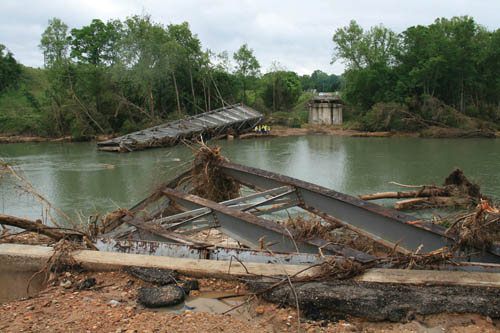 At one point during the heavy rain that fell across southern Missouri this past April, the only thing volunteer first responder Dan Israel, CE’83, could see from his back porch was the swollen North Fork River — a river that usually flows 100 yards from his house.

Floodwaters reached unprecedented heights the weekend of April 29, 2017, in Ozark County, where Israel lives with his wife, Caroline, CE’83. At its peak flow — 41.8 feet on the local gauge — the river consumed the homes of many of his neighbors and either flooded or destroyed bridges throughout the county, including several near their rural Tecumseh, Mo., home. Israel and his neighbors had no way out.

Israel works part time for the Ozark County Sheriff’s office and is a first responder and firefighter with the Tecumseh Volunteer Fire Department.

“I entered law enforcement right after high school,” says Israel, a past president of the Academy of Civil Engineers who retired as a geotechnical engineer and part owner from Terracon after 31 years in industry. “I kept a hand in law enforcement and have worked part time more than 26 years.”

As the river rose out of its banks that April weekend, Israel evacuated his neighbors — eight people, including four children. In all he helped save 17 lives during the flood. Three he plucked from a rooftop. Six others he pulled from the water.

Israel didn’t just save these people. He and his wife took them into their home. They fed them, gave them clothes and shoes, and provided other necessities, like toothbrushes. When they ran low, they called on the Ozark County Sheriff and the Missouri State Highway Patrol, and these agencies brought additional supplies by boat.

“These people were cold and wet,” Israel said. “All they had was what they were wearing; many of them had no shoes.”

Once floodwaters began to recede and the evacuees secured alternate living arrangements, Israel ferried them out. They were welcome to stay as long as they needed to, though. Five weeks after the flood, the last evacuee left the Israel residence.

“We had to get a little creative,” Israel says. “I’m just glad we were there and able to help.”

The recovery effort kept Israel busy. He developed house plans and consulted on other rebuilding projects.

The flood swept away Israel’s barn, all of his tools and his blacksmith shop. He began rebuilding the barn in mid-June.

“We are nearly back to normal,” Israel says. “Our barn has been rebuilt and the property cleaned up from the flood damage. We still have many of our neighbors’ personal property in our buildings as they continue to rebuild. As you can imagine, it’s been a real challenge, but progress is being made day by day.”