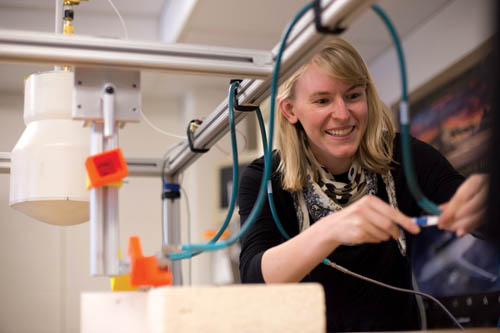 When the European Space Agency (ESA) launches its mission to explore Jupiter’s moons in 2022, the ambitious effort will stay connected to Earth thanks in part to the work of Mars Rover Design Team member Katelyn Brinker.

A member of the team’s science group during the 2017 University Rover Challenge (URC), Brinker, CpE’17, EE’17, spent her previous summer interning at Southwest Research Institute in San Antonio, where she helped write the software for an ultraviolet spectrograph that will be aboard ESA’s Jupiter Icy Moons Explorer (JUICE) spacecraft. The instrumentation will capture close-up views of Jupiter’s three largest moons as part of the expedition and, thanks to Brinker’s work, transmit that information back to Earth.

It likely won’t be the last time her work will provide us with a deeper look at space. Brinker’s sights are set on a career focused on creating spectrometers, cameras and other instruments to advance future extraterrestrial exploration. She also wants to develop nondestructive testing techniques to make space exploration safer. Brinker learned many of these techniques as an undergraduate research assistant in Missouri S&T’s Applied Microwave Nondestructive Testing Laboratory, and now she’s fine-tuning her expertise as a graduate student working with lab director Reza Zoughi, the Schlumberger Distinguished Professor of Electrical and Computer Engineering.

“I wasn’t a total space nerd until I joined Mars Rover my first week of college,” says Brinker, a native of Highland, Ill. “Once I got involved with Mars Rover, I found there were a bunch of people interested in space technology, and team members were going to work for SpaceX or intern at NASA, and I thought that was pretty cool.”

During the University Rover Challenge, she helped with experiments at the team’s base station during the competition and built a mechanism to collect samples from the Utah terrain. “I think the most exciting part (of the URC) was getting to meet all the new teams from all over the world,” she says. “We all have different ideas of what a rover should be and we all approached the competition in different ways, but we’re all super passionate about this project, advancing space technology and the journey to Mars.”