Not your average Fitbit

Imagine a device you can wear around your wrist, much like a Fitbit activity tracker. Unlike a Fitbit, however, this device not only tracks the steps you take in a day, but it also records movement and other bio-signals as well as information about the ambient environment. 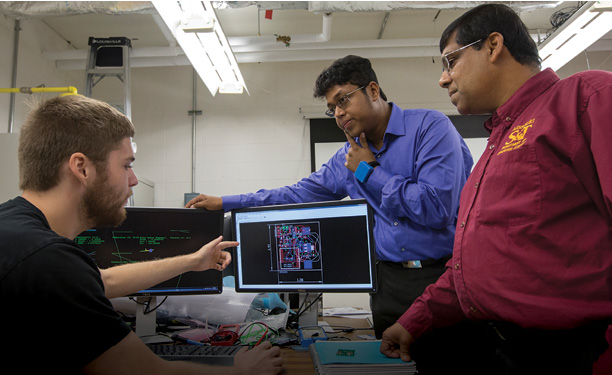 Wearable trackers, like the one designed by Alec Bayliff (left), Debraj De (center) and Sajal Das (right), could help train soldiers or rehabilitate hospital patients. The device, pictured below, is the size of a large wristwatch.

Debraj De, a postdoctoral fellow in computer science, is working with Sajal K. Das, the Daniel C. St. Clair Endowed Chair and department chair in computer science at S&T, to develop just such a sensor. They say it can be used to track activities and behavior of people with dementia and could one day help with Army combat training. The pair are working with physicians at Phelps County Regional Medical Center in Rolla on testing as part of the Ozark Biomedical Initiative, a partnership between Missouri S&T and the hospital.

It looks like an oversized watch and has four basic functions. Like a fitness tracker, it records fine-grained movement. It also measures the wearer’s direct physical environment for temperature, humidity and barometric air pressure. It can track health status through heart rate, respiration rate and galvanic skin response, which can indicate the wearer’s emotional state (indicating when a wearer is startled or agitated, for instance). The sensing device also functions like a GPS and communicates with Bluetooth beacons in proximity for various location contexts.

The device can be used a little differently for the Army. Benefits for the military include tracking respiration during rifle training to see if recruits are gun shy — hesitant to squeeze the trigger because of noise or recoil. It could also study soldiers’ physiological response to traumatic brain injury or exposure to pathogens.

The device is currently designed to be worn on the wrist, but smaller versions could be implanted in dog tags or incorporated into a military uniform, the researchers say.