Mark White’s kinetic art starts with something familiar to every Rolla grad: problem-solving. The movement of his large-scale metal sculptures is often described as mesmerizing and meditative. 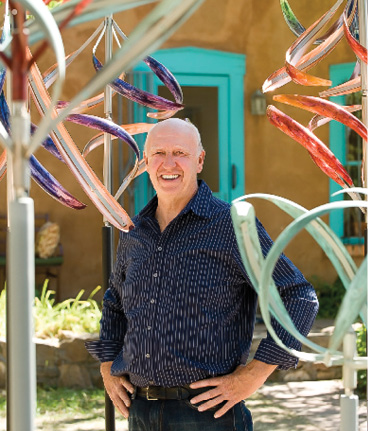 But make no mistake. Achieving this hypnotic quality is a complex balance of math, metal fabrication and Mother Nature.

“Making kinetic sculpture is first and foremost problem-solving,” says White, the New Mexico-based artist who created the new art installation in the Vaninger Family Plaza at Hasselmann Alumni House. The site-specific piece, “The Infinity of Influence,” was dedicated during the university’s Alumni of Influence celebration on Nov. 5.

By calculating movement and counter-movement, White creates 3-D works in copper and stainless steel that weave revolving optical illusions in the wind. His sculpture is designed to respond to wind velocity ranging from the slightest breeze to a 100-mph gale. “These pieces have to hold up in tough weather conditions,” he says.

After a stint as a social worker and economic development planner, White returned to the job he did to put himself through college: creating architectural metal work for buildings. And this is where his second career was born.

“I started cutting out dance figures in copper because my daughter was a modern dancer at the time,” says White. “I suspended them in the air like mobiles and watched them spin. Then I started abstracting everything to get to the essence of movement.”

White’s pieces are included in private and public collections nationwide. He has also completed many civic and corporate commissions for large-scale outdoor works. His sculpture owned by the late Joffrey Ballet co-founder Gerald Arpino was seen in the 2003 film, “The Company.”

From his studio on Canyon Road in Santa Fe, White continues to make art melding metal and air. Meanwhile, the winds of south-central Missouri are moving his newest work in a tribute to influence on the Missouri S&T campus.