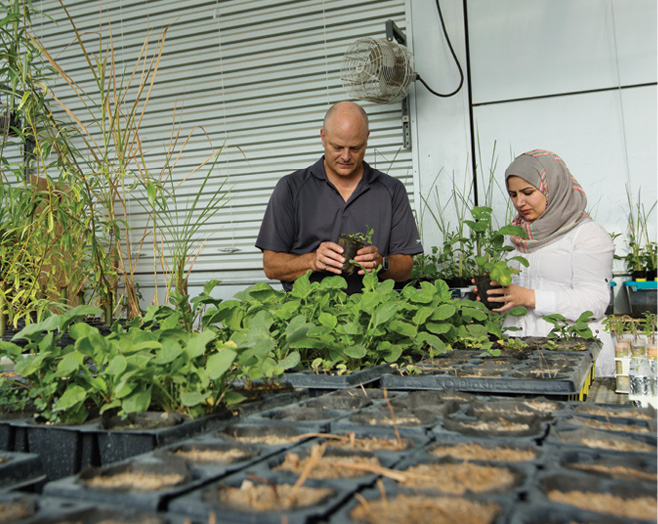 Working in the Baker Greenhouse on the roof of Missouri S&T’s Butler-Carlton Civil Engineering Hall, researchers are growing plants in mine tailings and studying whether the addition of nutrient-rich biosolids helps promotes growth.

The project, led by Ph.D. student Mariam Al-Lami and Joel Burken, Curators’ Distinguished Professor of civil, architectural and environmental engineering and chair of the department, is the outgrowth of a 2012 research agreement between Missouri S&T and Doe Run.

Mine tailings are the ground-up rock byproducts created when separating mineral from waste rock during the mining process. Impoundments where they’re stored typically have little ground cover, but through remediation of those sites, vegetation is planted. Miscanthus is one of the few plants that can thrive in such challenging conditions, but Burken and Al-Lami are assessing the addition of poplar and willow trees to that environment.

They found that the tailings that were treated with biosolids dramatically improved plant growth compared to untreated tailings.

The encouraging lab results earned Al-Lami the top student paper at the American Society of Mining and Reclamation’s annual meeting in June, as well as the chance to present her findings at the Ecological Society of America conference in August.

The researchers hope soon to translate their greenhouse findings into field trials on parts of a 300-acre tailings impoundment at Doe Run’s old Mine 28 in Viburnum, Mo.