Elvis once flopped in Vegas

Elvis Presley reigned as Las Vegas’ top nightclub act from 1969 through the mid-‘70s. But his first attempt to win over fans in that city 60 years ago was “a painful setback” for the young performer, says S&T historian Larry Gragg, an expert in the history of Las Vegas. 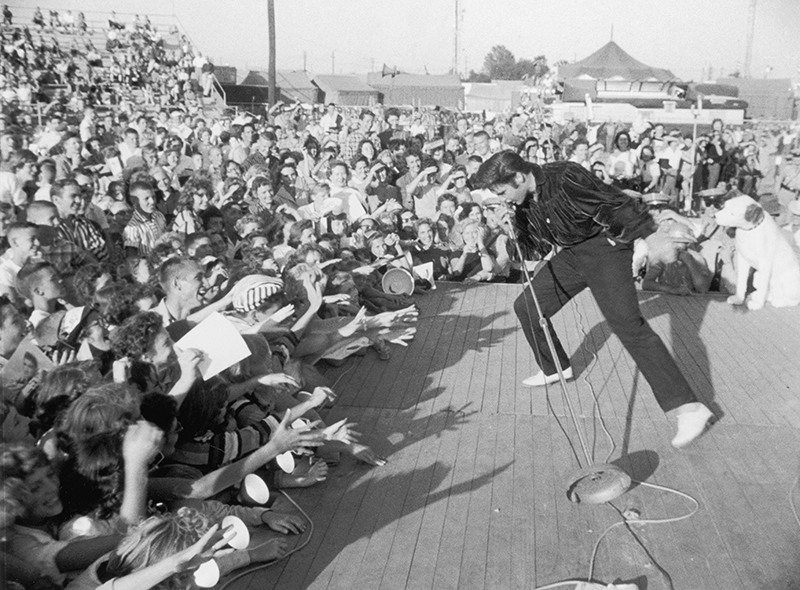 Elvis Presley may have wowed teens during his concerts, but his first visit to Las Vegas nearly 60 years ago was disastrous and left the young singer all shook up, writes Missouri S&T’s Larry Gragg (Photo by Hulton Archive/Getty Images)

Presley was a pop sensation on the rise, but Las Vegas nightclub audiences were not accustomed to his gyrations and raucous style, says Gragg, Curators’ Distinguished Teaching Professor of history and political science and the author of two books and numerous articles about Las Vegas in popular culture.

Encouraged by Presley’s success in concerts and TV appearances, his manager, Colonel Tom Parker, “decided that the next critical step in building a national presence for Elvis was for him to appear in a nightclub,” Gragg writes in “’They Weren’t My Kind of Audience’: Elvis Presley’s First Appearance in Las Vegas in 1956,” published in the Winter 2015 issue of Nevada in the West.

“It quickly became apparent that Elvis was ill-prepared for a nightclub crowd.” The crowd wasn’t prepared for Presley either.

On opening night, the nervous Presley “began with his hit ‘Heartbreak Hotel,’ which he mispronounced as ‘Heartburn Hotel,’” Gragg recounts. Almost immediately, one man near the front leaped to his feet, shouting expletives about “all this yelling and screaming” and resolving to “go to the tables and gamble.”

The rest of the audience “sat in stony silence for several minutes not knowing how to react,” Gragg writes, but eventually “a few people were tapping their toes and snapping their fingers as others offered polite applause, and as they left … most were talking about Elvis.”

Reviews of Presley’s performance that night were mixed. A writer for the Las Vegas Sun said the singer “failed ‘to hit the promised mark,’” and Newsweek said he was “like a jug of corn liquor at a champagne party.”

Presley was less than enthusiastic about returning to Las Vegas and its nightclubs, but he did some 13 years later. In July 1969, Presley — backed by two quartets and a 35-piece orchestra — “returned in triumph” to Las Vegas, performing at the new International Hotel “before a sold-out crowd that included a glittering array of Hollywood stars and Las Vegas luminaries,” Gragg writes.

Already associated with the city thanks to the success of his 1964 movie Viva Las Vegas, co-starring Ann-Margret, Presley’s dazzling performance on “that electrifying night in July 1969” firmly established him as “a true Las Vegas icon,” Gragg notes.