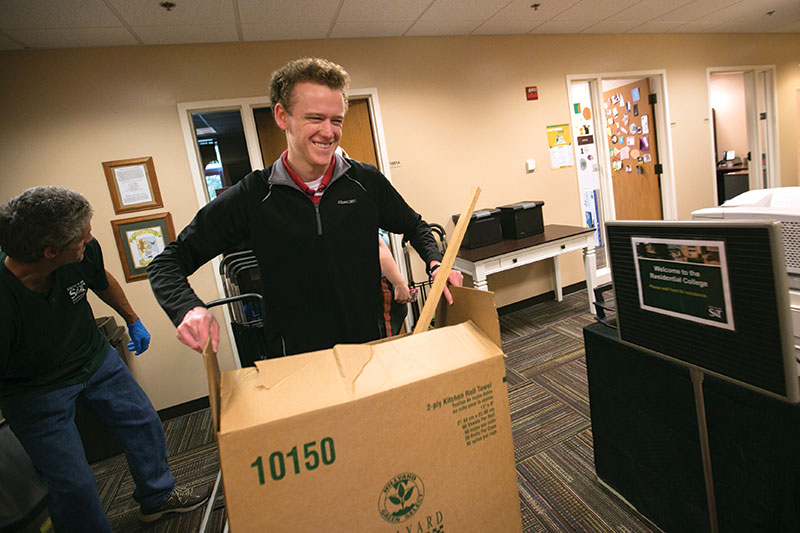 In his role as head resident, Josh Pribe supervised first- and second-year staff members and assisted with training, occupancy reporting and other administrative processes.

Josh Pribe, ME’16, spent three years of college knee-deep in residential life leadership. He wouldn’t trade the experience for anything.

He also gained valuable communication, conflict resolution and project management skills that will serve him well in graduate school and his career beyond.

Pribe started work as a resident assistant in the Residential Commons his sophomore year, thanks to encouragement from his own freshman-year RA. He moved up to senior RA the following year and graduated this past spring as head resident.

He learned a few things along the way.

“Being organized is an underrated skill,” Pribe says. But he has no trouble in that area. A member of Tau Beta Pi and National Residence Hall Honorary, he also conducted research in strengthening 3-D printed metal parts, using different frequencies to try to find weaknesses without breaking them.

“You also have to be a good listener,” says Pribe, who found that fellow students routinely sought him out as a sounding board. “I can sit and talk to anyone about anything. One of my supervisors once told me that I could find common ground with a wall.”

That is a useful skill in a job that begins with a daunting task — building a community among a large group of people who have never met. Pribe found the best way to accomplish that task was to let each group develop its own identity.

“Some groups are into video games, some like intramurals. Last year my floor was a bunch of goofballs,” he says. “They created their own anime and modeled the God character after me.”

Sometimes groups start out as friends but members can become annoyed with each other and rifts can develop. RAs are trained in conflict resolution to help those students move past their problems.

“You learn how to trust people, how to inspire trust in others and, maybe most importantly, you learn how and when to approach people when you need help,” Pribe says.

Being an RA is a lot like living in a fish bowl — you’re always being watched. So Pribe says being a role model for other students is essential.

“We talk a lot about how students notice what we do both inside and outside of our floors or communities, so it’s important for us to model responsibility consistently,” Pribe says. “This means doing things like going to class, setting aside time to study and getting homework done. If we’re not making good decisions both within and outside of our direct responsibilities as res life staff, we can have a negative influence on the students we’re supposed to be helping.”