For the first time in over two years, S&T students, faculty and staff, and Rolla community members got an up-close look at celestial objects thanks to Ken Goss, a senior in computer science and computer engineering. Last August, Goss hosted the S&T Observatory’s first Visitors’ Night in over two years. 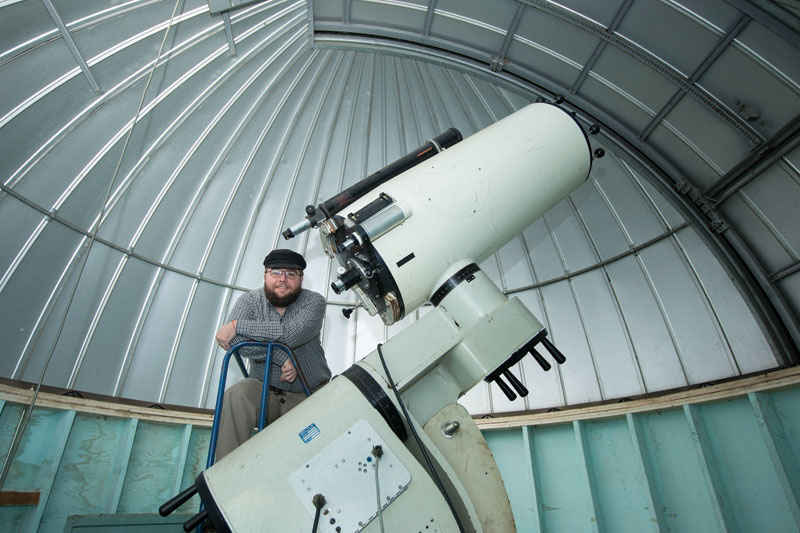 The physics department had been looking for someone to take over Visitors’ Nights since John Schmitt, associate professor emeritus of physics, retired in 2013. Schmitt taught astronomy and ran the observatory for decades.

“Few with my neophyte status have the privilege of handling a telescope this big, so I’m happy to serve the public.”

Paul Parris, professor of physics, discovered that his neighbor who often stargazed from his front yard using a personal telescope was an S&T student. One night when Parris took his trash bin out to the curb, he approached his neighbor about the observatory.

Goss says he grew up with a “nascent interest” in astronomy. “I’d go out and look for different things at different times of the year.” He says his interest has grown in the last two or three years, since he bought a telescope — the same one Parris saw him using. He now considers himself an amateur astronomer.

Before coming to S&T, Goss and his wife, Heather, both majored in music education. He earned bachelor’s and master’s degrees and student-taught music in Missouri’s Kirkwood School District. Then the economic recession came, and the job market crashed.

Goss decided to go back to school at S&T to become a computer engineer. “I was afforded the opportunity to retool my skill set,” he says.

He never thought he would be running a university observatory.

“Few with my neophyte status have the privilege of handling a telescope this big, so I’m happy to serve the public,” he says.