During high school, Manish Sharma often studied by candlelight. Power outages lasting six to eight hours a day were a fixture of hometown life in Khurja, India. For most of his peers, studying in America was a distant dream. But Sharma never gave up on his goal. 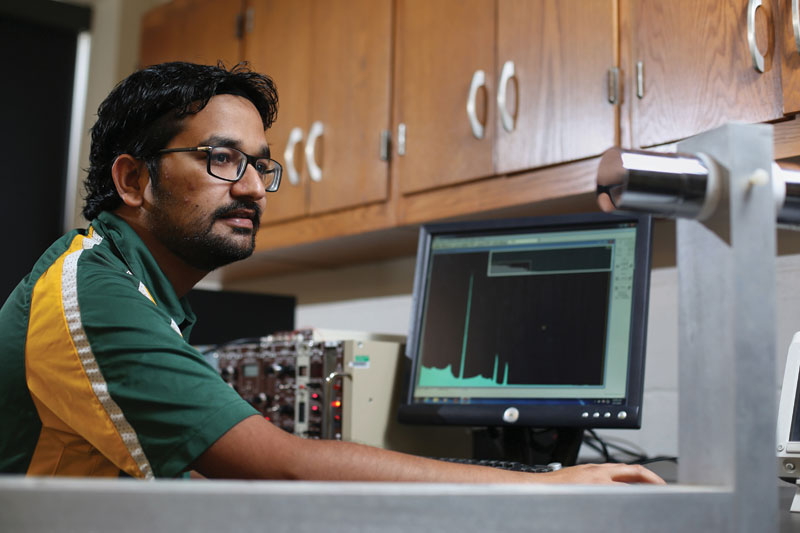 “I never gave up because I knew tomorrow would be better,” he says. “I turned my plans into actions and went out of my comfort zone to make things happen.”

“I put forth my best and focus on enjoying the ride. Dedication and determination to my work has made my experience great.”

“At a certain threshold, nuclear radiation like X-rays and gamma rays may negatively impact the health of living tissue, but current radiation-detection devices used by employees at nuclear facilities only detect doses that have already been absorbed in the employee’s body,” Sharma says. “My work will attempt to develop technology that is more proactive in detecting doses of radiation and will help the personnel to avoid radiation-prone areas, eventually resulting in less radiation exposure.”

Since he began work on his Ph.D. at Missouri S&T in 2011, Sharma has stepped even further out of his comfort zone. He was a lead counselor at S&T’s Jackling Introduction to Engineering summer camp, danced on the winning team at Celebration of Nations and learned to play the guitar.

“I follow a style of doing things where I choose one thing to do at a time and give 100 percent to that without focusing on the outcome,” Sharma says. “I put forth my best and focus on enjoying the ride. Dedication and determination to my work has made my experience great.”

After graduation, Sharma’s goal is to change the world by shaping the minds of students as a professor.

“So much of a country’s future development is primarily dependent on the youth,” he says. “As a professor, I want to bridge the gap between young, passionate youth and experienced researchers.”

“I never gave up because I knew tomorrow would be better.”