While some undergraduate students peer through microscopes or write computer programs for their research projects, senior Arielle Bodine made the world of professional golf her laboratory. The applied math and economics double major recently took an eagle-eyed look at the factors that led Phil Mickelson and 46 other top professional golfers to pick up valuable endorsements. 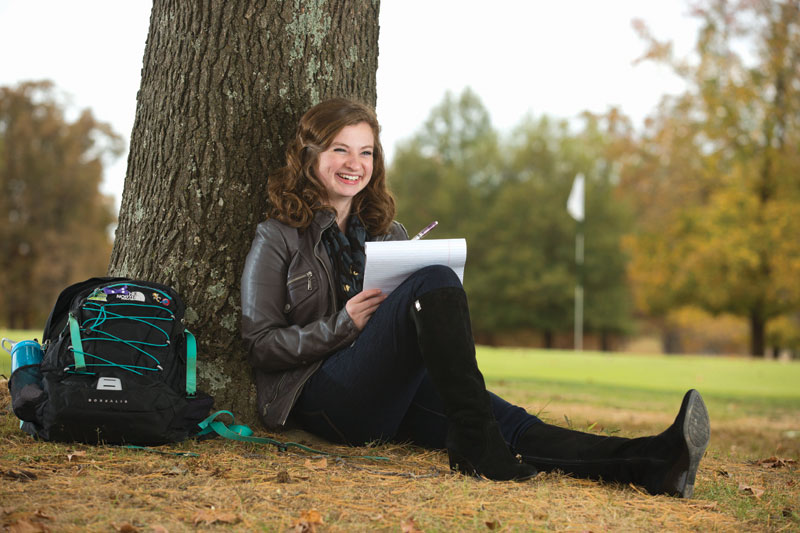 “Professional golfers make a significant portion of their yearly earnings from sources that are not tournament purses,” says Bodine. “In fact, many golfers make more money from endorsements and off-course appearances than they do from golfing in tournaments.”

Previously published studies used statistics to link specific skills on the course with the amount of money that a golfer makes in tournament earnings. Bodine decided she wanted to discover if there was a connection between the skills displayed during a tournament and the player’s ability to earn money off the course.

“My study took five aggregate statistics (scoring, putting, accuracy, short game and power) and attempted to link them with a specific dollar amount that they produce for a professional golfer off the course.”

“My study took five aggregate statistics (scoring, putting, accuracy, short game and power) and attempted to link them with a specific dollar amount that they produce for a professional golfer off the course,” says Bodine.

For the past 12 years, Golf Digest has published its annual list of the sport’s top 50 earners. Bodine used the financial information from those lists and combined it with skill data from ShotLink for analysis using statistical software. Bodine says economics associate professor Michael Davis’s Intermediate Macroeconomic Theory class inspired her project.

“It took a lot of personal motivation to complete my project but I learned perseverance and to have pride in the work that I’ve done,” she says. “I also learned to ask for help — a skill that isn’t often taught in the classroom.”

In the end, Bodine found that golfers with higher accuracy and power were able to earn more off the course when scoring was not considered. She says that scoring was originally the only statistically significant skill, but removed it during a second run of the statistical model because scoring could be thought of as the result of other skills.

“It’s groundbreaking in the sense that no one has previously studied that connection,” she says. “When I ran the final analysis, I was sitting there and was almost in tears. It felt like it was a long and arduous process to get to that point, but it also was really awesome.”