Eric Bohannan: Ever the Optimist 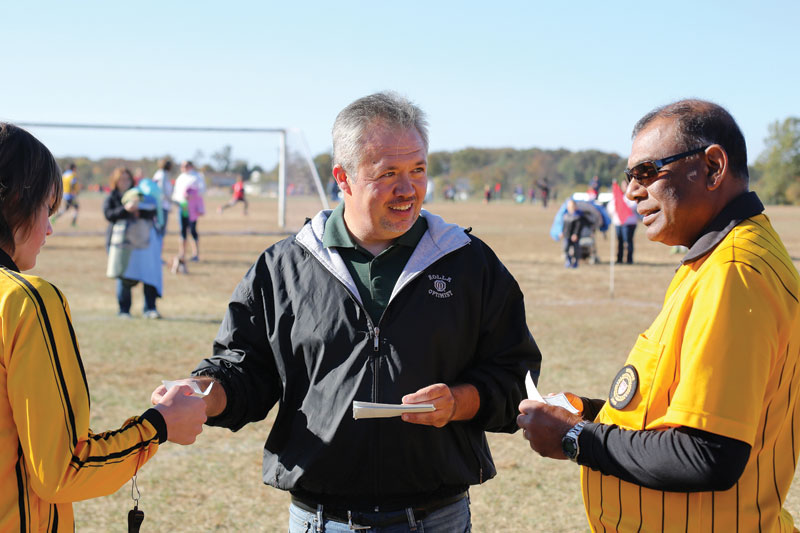 If you’re looking for Eric Bohannan, PhD Chem’99, on a Saturday morning, chances are, you’ll find him on a soccer field.

Bohannan, a senior research specialist in Missouri S&T’s Materials Research Center, has been involved with soccer in Rolla since 1999, first as coach of his son’s Optimist team, later as a member of the Rolla Optimist Club and now also as president of the Rolla Area Youth Soccer League (RAYSL).

Between the Optimist and RAYSL programs, nearly 800 kids ages 4 to 14 are introduced to soccer. Over the years, Bohannan has coached at least 30 teams. He chaired the Optimist soccer program for four years. Now he manages game-day operations.

“Kids need positive things to do.”

“Soccer is a relatively inexpensive sport, requiring a ball, some goals and shin guards,” Bohannan says. “And the Optimist Club of Rolla never charges a fee for a child to participate in its programs.”

That service to the community is why Bohannan got involved with the Optimist Club.

“I like working with sincere, community-minded individuals who want to provide beneficial activities and programs to the youth of Rolla, regardless of their ability to play.”

But the Optimist Club is about more than just soccer, and Bohannan helps out with nearly every project — from cooking sausage at the club’s flapjack breakfast and tying Christmas trees to cars at the annual tree-lot fundraiser to serving as announcer for the Optimist Spelling Bee and working with the boys and girls basketball, volleyball and tennis programs.

“The Optimist Club of Rolla provides opportunities for participation in academic, service and sports activities to our youth with no barrier to entry. I like that,” Bohannan says. “Kids need positive things to do. The members of the Optimist Club are exceedingly positive people with can-do attitudes, good senses of humor and huge hearts. We do a lot of good for a relatively small amount of money. It’s my Mayberry.”