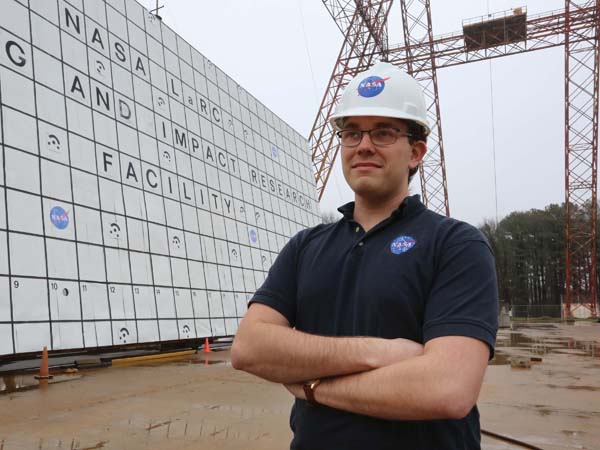 When he was a teenager, Missouri S&T doctoral student and former NASA employee Paul Friz looked up into the night sky and found the twinkling points of light, a thousand beacons in the darkness, irresistible. He was hooked.

So when he was 14, Friz, MS AE’14, saved up his lawn-mowing money and bought his first telescope — an 8-inch Dobsonian Reflector — to bring the sky’s lights closer. He looked at the gas giant Saturn; it’s the solar system’s sixth planet from the sun and looks like a star to the naked eye, but its rings and moons came to life in his telescope’s lens. Then he went out of Earth’s solar system to view the M44 Beehive Cluster located in the constellation Cancer.

“I believe I chose those objects because they were easy to find in the sky, and I didn’t really know what I was doing at that point,” Friz says.

Looking through that first telescope in a cemetery behind his Creve Coeur, Mo., home was the first step in a journey that has led Friz, 25, to pursue a Ph.D. in aerospace engineering at Missouri S&T.

Before that, Friz was a NASA Pathways intern in Langley, Va., and was at NASA’s Jet Propulsion Laboratory in Pasadena, Calif., as an assistant to the project manager on the Rosetta mission that put an orbiter around comet 67P/Churyumov-Gerasimenko.

He was there when the orbiter launched the Philae lander that synched up with and landed on the comet. When it finally touched down and started sending data, the relief in the room was palpable.

“Going to space has always been a dream of mine,” he says. ”If I ever have the opportunity to be an astronaut I will take it, but there are thousands of other people who are more qualified for that job than I am. So right now I’m not betting on it, but I am aligning my career and lifestyle so that I can take the opportunity if it
comes up.”