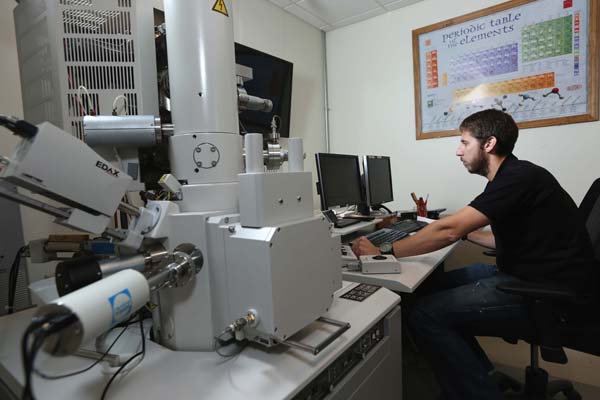 By the year 2025, cars and light trucks will average 54.5 miles per gallon — at least that’s the goal set by the U.S. Department of Transportation in its corporate Average Fuel Economy (CAFE) regulations.

To get there, auto manufacturers are looking at ways to improve exhaust treatment systems, transmission efficiency and aerodynamics. But reducing vehicle weight is also important in achieving the CAFE goals, says Ronald J. O’Malley, the F. Kenneth Iverson Endowed Chair of Steelmaking Technologies at Missouri S&T.

Using a process known as TRIP — or transformation-induced plasticity — O’Malley is developing a third-generation advanced high-strength steel in S&T’s Kent D. Peaslee Steel Manufacturing Research Center. It is stronger and more lightweight than the first-generation steel used in today’s cars and trucks, and it’s easier and cheaper to make than the second-generation material currently being developed.

The process involves the transformation of an unstable crystal structure known as austenite, which normally exists at high temperatures, into martensite, a harder substance that develops as the steel deforms. Under the direction of David C. Van Aken, Curators’ Teaching Professor of metallurgical engineering, the Missouri S&T team has used an atomic modeling method known as density functional theory to identify alloying elements to create the dual TRIP character of these new steels.

One benefit of conducting the research at Missouri S&T is the ability to create and test small batches of steel. S&T’s labs can create 200 pounds of steel at a time, whereas big steel manufacturers like Nucor, where O’Malley was chief metallurgist before joining S&T, would have to make 170 tons of steel for testing, O’Malley says.