Color printing with no ink 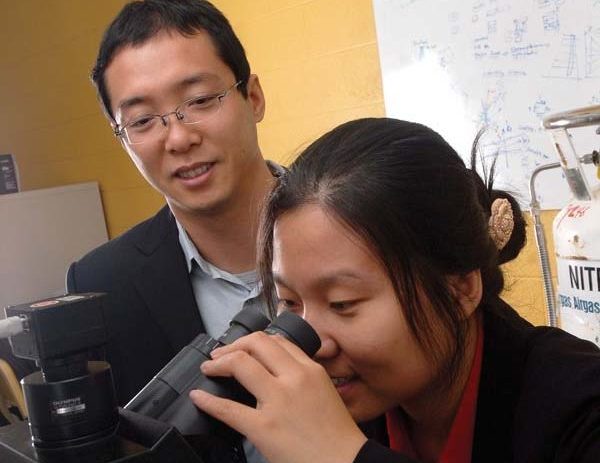 Unlike inkjet or laser printers, which use mixtures of various pigments to reproduce color on a printed page, a new process developed by a pair of S&T mechanical engineers uses nanomaterials for color printing with no ink. The finished product is visible only with the aid of a high-powered electron microscope.

Xiaodong Yang and Jie Gao, both assistant professors of mechanical and aerospace engineering, say the process could be used for high-tech security markings that are invisible to the naked eye, or for a light-based method of information storage that could replace magnetic hard drives. Their work was published in the Nature Publishing Group journal Scientific Reports.

Their printing surface consists of a film of silica sandwiched between two thin films of silver. The top layer of silver film is punctured with tiny holes created by a microfabrication process known as focused ion beam milling. The researchers then beamed light through the holes to create an image using no ink — only the interaction of the materials and light.

By varying the size of the holes, the researchers could create different colors. So far they have produced gold, green, orange, magenta, cyan and navy blue.