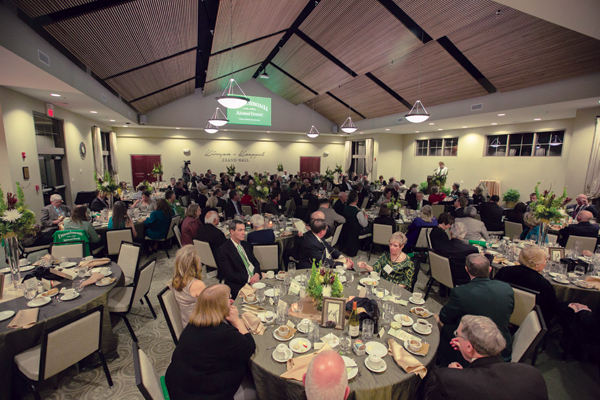 The central gathering place in Hasselmann Alumni House — the Kinyon-Koeppel Grand Hall — is named for two men with a vision for the future of the Miner Alumni Association. Although they’re no longer with us, their generosity is a big reason why the house now stands as a welcoming destination for alumni and guests the world over.

Pete Kinyon, an honorary S&T alumnus and a graduate of the University of Michigan, believed that Rolla is strengthened by the presence of a great university. A proud Rolla resident and longtime supporter of Missouri S&T athletic teams as well as the Miner Alumni Association, he made a gift of stock that went toward the Grand Hall naming opportunity.

Beverly Koeppel, EE’38, made a bequest to Missouri S&T. And in 2012 Chancellor Cheryl B. Schrader designated that estate gift — Koeppel’s contribution to the university — in support of Hasselmann Alumni House. Koeppel’s bequest allowed the alumni association to offer matching funds on a one-to-two basis for naming donors.

“I am sorry that neither Mr. Kinyon nor Mr. Koeppel were able to see their gifts put to work,” said
Joan Nesbitt, Missouri S&T’s vice chancellor for university advancement, during the dinner celebrating the home’s grand opening. “I believe they would be thrilled to know their legacies will live on every single time we welcome a visitor to Hasselmann Alumni House.”