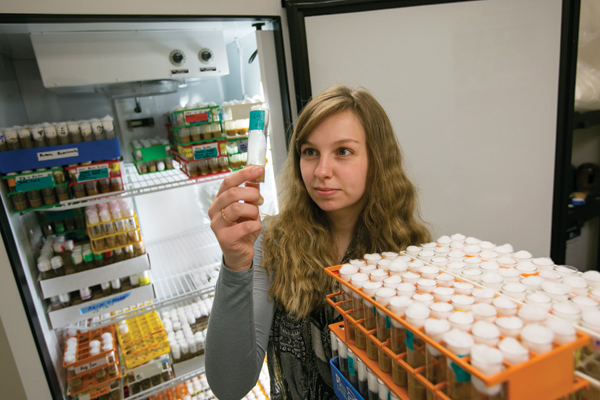 According to the Alzheimer’s Association, people with Alzheimer’s Disease often have sleep pattern changes, and sleep changes somehow result from the disease’s impact on the brain.

Matt Thimgan, an assistant professor of biological sciences, is working with V.A. Samaranayake, a Curators’ Teaching Professor of mathematics and statistics, and Gayla Olbricht, an assistant professor of mathematics and statistics, to develop a mathematical model of sleep in Drosophila melanogaster — the common fruit fly — to help figure out why. Their work is one project under way in S&T’s Center for Statistical and Computational Modeling of Biological Complexity.

“If we fine-tune the ability to get sleep, we might mitigate the consequences of sleep deprivation,” Thimgan says. “It’s something that everyone can relate to; sleep deprivation affects a huge portion of the population.”

Computational modeling exponentially speeds the process, the researchers say, because traditional methods of biological research could take weeks or months instead of the hours or days needed with computer modeling.

The flies don’t actually have age-related onset Alzheimer’s disease. Using fly genetics, the researchers “induce the human proteins that are thought to be hallmarks of the disease in the fly brain to produce Alzheimer’s-like characteristics in these flies,” Thimgan says.

“We can induce different severities of Alzheimer’s disease and determine if it affects the outcome of our mathematical modeling and how the severity might affect lifespan.”