Aysen Malone: Guiding the next generation 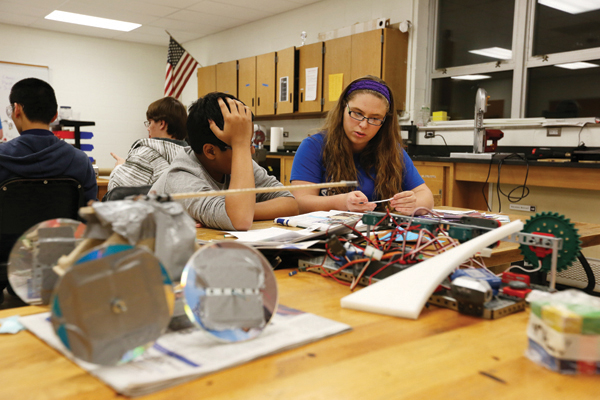 Incoming junior engineering student Aysen Malone knows that a strong mentor can leave a lasting impression on a person. Inspired by her own first mentor, she returns to the high school she graduated from twice a week to help support its robotics teams.

The teams compete in the FIRST Tech Challenge (FTC), a nationwide robotics competition involving teams of up to 10 students between the ages of 14–18 in grades 9–12. Each team designs, builds and programs a robot for a tournament-style competition.

Malone, a three-year veteran of the robotics competition, joined the team during her sophomore year at Rolla High School.

During Malone’s first year on the team, the group qualified for the FTC world championships. Once she experienced the fierce competition at a worldwide level, she was hooked on bettering the team’s robot.

“When I first joined the team, I was shy and kind of intimidated by talking with the other members,” recalls Malone. “But then Philip Allen, one of the team’s mentors, walked up to me and asked me all about what I was interested in and helped introduce me to the team. He was a close friend to everyone on the team and was always willing to go the extra mile to help the students. He is also the main reason I chose to go to Missouri S&T.”

During Malone’s first semester at college, Allen, ME’94, died in a traffic collision on Oct. 10, 2014. The shock of losing a beloved mentor to the team was difficult for all past and current members.

In Allen’s memory, Malone decided to continue his legacy of mentorship. Despite her busy schedule of classes, maintaining a job on the Missouri S&T campus and leading the Turkish Student Alliance as president, Malone insists on visiting the Rolla teams as often as she can.

“All of the volunteers work so hard and freely give of their time to help the students, no matter if they have other obligations,” she says. “I will always be grateful for the footsteps that Phil left for me to follow.”