More than 18,000 servings of Yoplait dairy products are consumed around the world every minute. Many of those servings come from the Carson, Calif., General Mills plant, which sits right in the middle of metropolitan Los Angeles. Plant manager Mike Noble oversees the production facility, which helps the brand produce the more than 11 different types of yogurt and over 85 flavors available across the Yoplait product line. 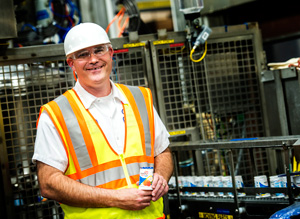 The plant is in operation 24/7 nearly 320 days a year. Noble, Phys’91, gets to work at 6:30 a.m. to check the facility’s overnight performance. He makes sure there aren’t any safety issues, then looks at the production numbers.

“If I see any issues, I walk the production floor to get a feel for how things are running or follow up on previous problems,” he says. “Being in a food production industry, sometimes just getting the job done isn’t as important as how we get the job done.”

Hundreds of thousands of gallons of milk move through the plant every day, as do several thousand pounds of strawberries, blueberries and peaches — Yoplait’s three most common varieties. In an average day, nearly 1 million yogurt products are made, packaged and prepared for shipment to retailers across the nation.

Throughout this process, quality control is essential. Workers ensure each flavor goes into a properly labeled cup, and every 30 minutes a tester pulls a cup for a sensory check to examine color, consistency, mouth feel and flavor.

“We want our products to taste good and to look appealing so you would want to eat them,” Noble says. “Our employees are very quick to identify when something is a little off. A flavor pump could be operating too fast and adding too much flavor, or too slowly and not adding enough.”

Noble is no stranger to solving those technical problems. After a five-year stint as an aircraft maintenance officer, he started his career with General Mills at a plant that produced Betty Crocker baking products.

One particular technical issue required Noble and his team to think and act quickly.

“I remember a critical piece of the production line failed in the middle of a shift one day, resulting in 2,000 pounds of chocolate frosting on the floor,” says Noble.

With safety and cleanliness a top priority for Noble, he and his team spent more than an hour cleaning up and repairing the production line for operation.

“Having to clean up that much chocolate frosting makes one less interested in chocolate for a while,” he says.

A background in physics gives Noble a unique perspective on the manufacturing process. 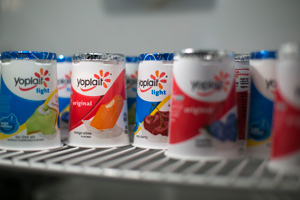 “I don’t believe that anything just happens,” Noble says. “There is a cause for everything, and we can solve everything. Describe why it happened and find the reason. Then we can fix it.

“In school, (physics professor) Don Sparlin would tell us, ‘Make new mistakes as fast as you can.’ He would explain that if you’re making new mistakes it means you’re moving forward, solving problems as you go. It’s absolutely true,” Noble says.

Noble sees a correlation there with human behavior and is working to more fully understand the way the human brain works so he can help his employees be more productive.

“I work in a very technical manufacturing environment with lots of equipment,” Noble says. “We’re always trying to solve problems and make things run more efficiently. In the end, though, we’re working with other people to solve those problems.

“People who know how to solve technical problems and know how to make a team work well together — those are the kinds of people who will be the most successful.”