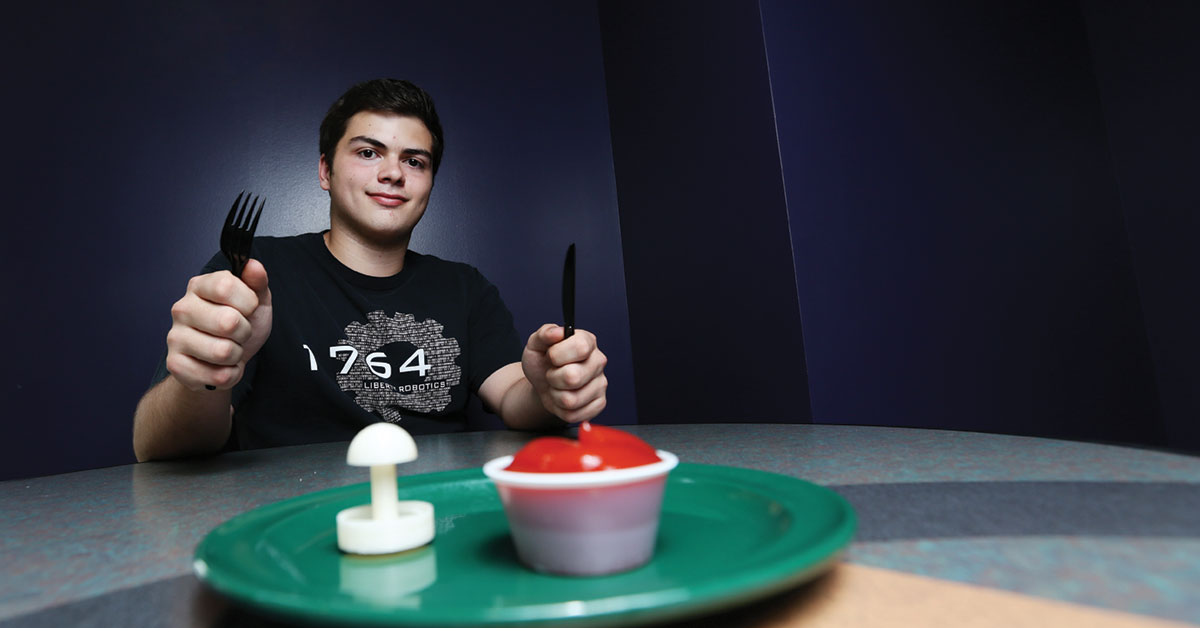 The solution to the soggy bun epidemic may be the brainchild of Missouri S&T freshman Tyler Richards and his friend, Jonathan Thompson. And it all started as an assignment for their high school Project Lead the Way capstone course, Engineering Development and Design. That’s when the Liberty, Mo., teens decided to tackle a common problem:  How to keep water from running out of the ketchup bottle when it’s squeezed.

“If you don’t shake the bottle, any water that has separated from the ketchup will not be mixed back in,” Richards says. “It will come out the bottle before the ketchup does, leading to soggy buns. Soggy buns are gross.”

The Pythagoras cup, a clever vessel invented by the Greek mathematician and philosopher Pythagoras of Samos, served as inspiration for the pair. Designed to encourage drinking in moderation, the cup can only hold an optimal amount of liquid.

Richards and Thompson explored dozens of ideas over the course of the school year before coming up with their Syneresis Negation Apparatus (SNAP), a mushroom-like cap they created using a 3-D printer.

“Like the cup, our design uses pressure to force a substance up and over a tube,” he says. “It was also based off a plumbing trap — though instead of stopping gas with water, our cap stops water with ketchup.”

The pair has received widespread media attention for their invention. They’ve applied for a provisional patent for the design and are working on leasing the patent to other companies to produce.

“This whole ketchup cap project and the attention that followed was certainly an experience,” Richards says. “It’s not often a high school student spends months researching ketchup. I just loved doing the hands-on projects and designing solutions for assignments.”

He credits the project with helping him understand the process that goes into designing and creating new things.

“It has also taught me that sometimes the simplest approach is the best,” he says.

A former member of his high school’s FIRST robotics team, Richards is majoring in engineering at S&T and is looking forward to joining a design team.

“I chose Missouri S&T because it is a great school for people interested in science and technology,” he adds.