For family, for country, for the future

Nearly everything Luis Pereira does, he does for future Hispanic college students — especially his 4-year-old brother, Johann. 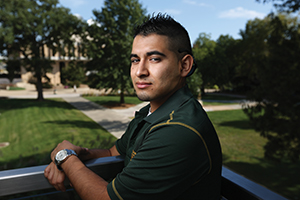 “I want my little brother to know, ‘You can do it; you can go to college,’” he says. “One of my passions is being a role model for my little brother; 15 years from now, I want to be visiting S&T with him.”

Pereira, a senior in computer science, transferred to Missouri S&T from State Fair Community College in Sedalia, Mo., in fall 2013. The first in his family to attend college, he wants to be an example of the opportunities Hispanic students have in the science, technology, engineering and math (STEM) fields.

“Within the Hispanic community, especially if your parents haven’t gone to school, you don’t know anything about college,” Pereira says.

In January, Pereira returned to Honduras for a third time with Engineers Without Borders as the team’s translator.

Pereira, who lived with his grandmother in Honduras until he was 12, says he remembers calling American volunteers in Honduras “gringos” when he was a child.

“I never imagined I was going to be a gringo,” he says, laughing. “I’m so proud of being a gringo, coming back to my country and helping.”