Bob Zdvorak, EMgt’86, a wing defender in the early days of Miner soccer, is now a regular in the stands cheering on his sons, who are the first second-generation players in the program’s history. 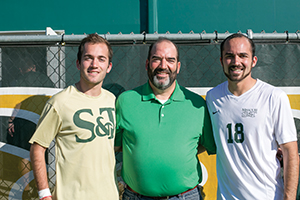 Bob Zdvorak, EMgt’86, with his sons David (right), a senior, and Chris (left), a freshman, who are both second-generation Miner soccer players.

As a defender, Bob helped the defensive unit record 16 shutouts in three years. His son, David, a senior in civil engineering, scored four goals last fall, including the only goal scored in the Miners’ first win at the University of Wisconsin-Parkside in September. Bob’s other son, Chris, a freshman in engineering, played in over half of his freshman season games.

“Every single day is a challenge at this institution,” David says. “Playing soccer here at S&T has taught me to live my life under pressure and competition through successes and failures, which I feel will help me in the workforce following graduation.”

Playing in a competitive league like the Great Lakes Valley Conference while trying to meet Missouri S&T’s academic demands is a challenge, but the brothers say it has prepared them well for the future.

“I knew that if I could take care of academics and be successful in the soccer program at Missouri S&T, life would be a lot easier,” says Chris. “Having to focus on academics and soccer has proven to be challenging already but not unmanageable.”