Chartered in 1964 at the height of the civil rights movement, Missouri S&T’s oldest African-American fraternity encountered obstacles on the way to its 50th anniversary, especially in the early years. 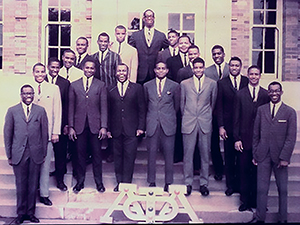 The founding members of the Epsilon Psi chapter of Alpha Phi Alpha.

“There were some early difficulties in getting the fraternity off the ground,” says Henry Brown, CE’68, one of 18 founding members of the Epsilon Psi chapter of Alpha Phi Alpha fraternity.

Brown says founders felt resistance from university administrators, who questioned the need for a new historically black fraternity in Rolla when there were already a handful of nationally recognized fraternities on campus.

“But it wasn’t a realistic possibility for us to walk up and join one of the fraternities already on campus,” Brown says.

The students eventually convinced school administrators with the clout of local chemist Lawrence C. George, who had agreed to be the fraternity’s resident advisor. He later joined the staff at Missouri S&T and retired in 2006 as the special assistant to the chancellor for affirmative action and equal employment opportunity.

And George, who only stepped down as the fraternity’s advisor in 2013, continues to help. “He’s touched a lot of people’s lives,” says Lister Florence, CE’95, the fraternity’s current advisor. “He’s been a father-like figure in my life.”

Alpha Phi Alpha is planning a weeklong celebration for its 50th anniversary in April.