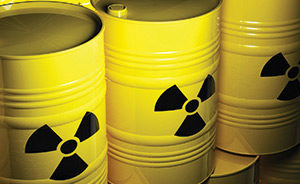 Some radioactive wastes have a half-life as long as 50,000 years. Known for its durability, iron phosphate glass can survive for tens of thousands of years — long enough for even the most dangerous radioactive nuclides to decay away.

For decades, the U.S. Department of Energy (DOE) has combined radioactive waste with borosilicate glass, then placed the mixture in stainless steel containers for storage.

“But certain wastes aren’t compatible with the borosilicate, so only small amounts can be added to the glass before the solubility limit is exceeded,” says Richard Brow, Curators’ Professor of materials science and engineering.

“The key is developing a glass that is compatible with as large a fraction of the waste materials as possible,” he says. “That way you can manufacture a small volume of the glass, so it takes up the least amount of space.”

It turns out that an iron phosphate glass developed at S&T is a good alternative.

“This glass was discovered by accident by Delbert Day (CerE’58)and his students 20 years ago,” says Brow. “It’s unusual in that it remains very chemically durable, even after you load it with large concentrations of other species.”

Brow says the iron phosphate glass passed the DOE’s chemical durability tests and that the DOE successfully created it in several large-scale production tests. S&T researchers are now working with the DOE to optimize compositions for specific wastes and try to understand why iron phosphate glasses are so durable.

“We’re asking, ‘What is it about molecular-level features of this glass that make it so interesting, so useful for this particular application?’” says Brow.