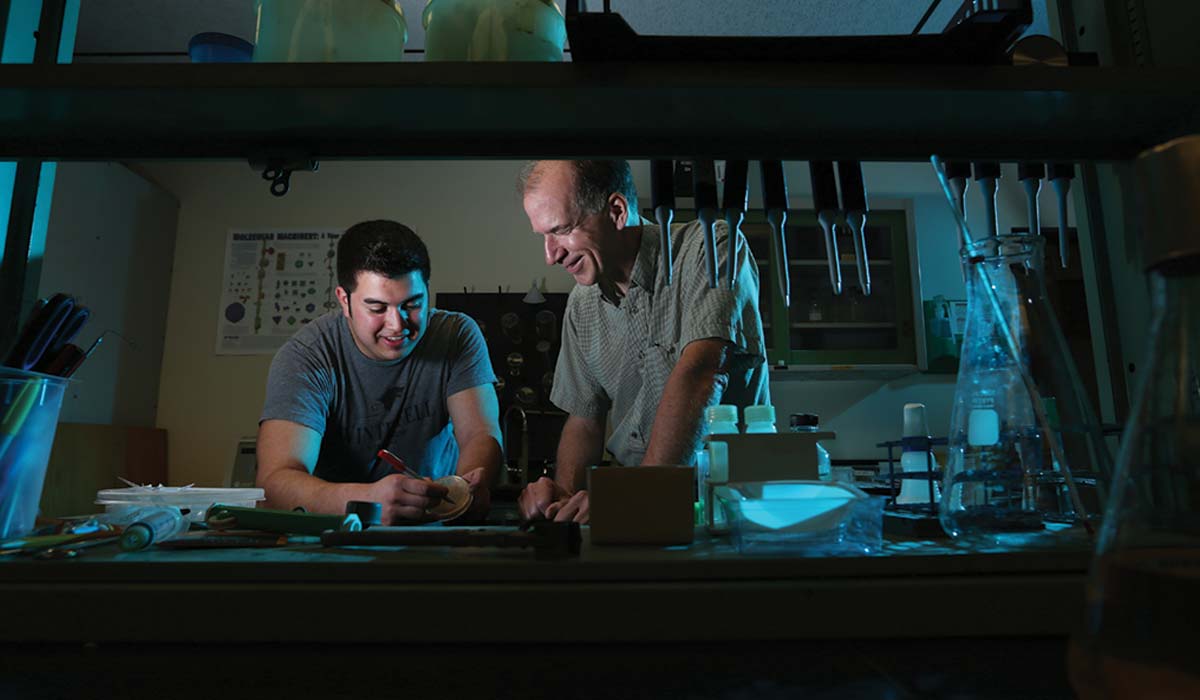 For years S&T has been a leader in glass-related medical research, beginning with Delbert Day’s glass microspheres. These tiny irradiated beads deliver localized radiation to malignant cancer cells in the liver.

Now David Westenberg, associate professor of biological sciences, is working with Day, a Curators’ Professor emeritus of ceramic engineering, to advance the nanofiber borate glass used in clinical trials to speed the healing of wounds.

Westenberg and his students are working with ground up samples of Day’s bioglass. They’re testing samples made with various compositions of metals to see how well they kill bacteria.

The students mix powdered glass with diluted bacteria, and then gauge the bacteria’s response to the glass using the “zone of inhibition” method. Bacteria that are susceptible to the glass will die, forming a circular ring around the glass particle. That ring makes it easier for researchers to confirm the death of the bacteria.

Westenberg is testing three bacteria: Staphylococcus epidermidis, E. coli and Pseudomonas aeruginosa, a bacteria common with burn wounds. “These are surrogates for disease-causing bacteria, such as MRSA (Methicillin-resistant Staphylococcus aureus), a bacteria that is resistant to many antibiotics and a major concern for hospitals,” he says. “But I’ve got a collection of about 40 to 50 bacteria that we still need to test.

“After 24 hours, you can see that the glass is killing the bacteria,” he says. “The glass alone will kill the staph, but E. coli is more resistant. When silver is added to the glass, it’s much more effective on E. coli.”

Westenberg says adding other metals to the glass could help kill different types of bacteria. His next round of experiments will use solid plates of glass to see how bacteria thrive on those surfaces.

“His work has changed the perspective of my research,” the biologist says of Day, CerE’58. “I’m a plant and microbiology person. I had no interest in medical research before working with him, but he’s become an incredible mentor to me and to my students.”