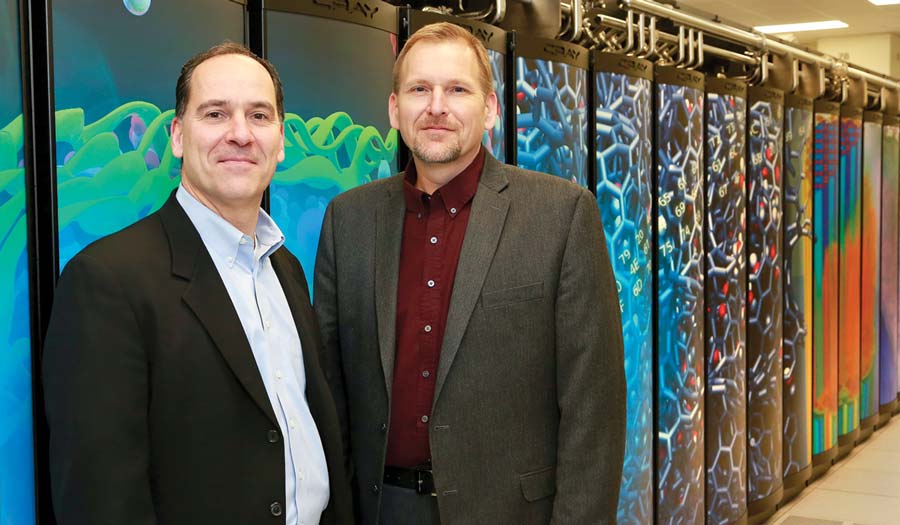 The Wagner brothers, John (left) and Robert, in front of one of the world’s fastest supercomputers, Titan. (Photo by Jason Richards/ORNL)

For more than 14 years, brothers John Wagner, NucE’92, and Robert Wagner, ME’93, MS ME’95, PhD ME’99, have worked at Oak Ridge National Laboratory (ORNL), the Department of Energy’s largest multi-program science and energy laboratory. ORNL owns a piece of history through its role in World War II’s Manhattan Project. It is also home to Titan, one of the world’s fastest supercomputers.

“We both worked at ORNL in separate departments as interns during our college years,” explains Robert. “It was a bit of a surprise, actually, that we both ended up here. We hadn’t really discussed it with each other. John was changing jobs and I was hired right after I graduated from S&T.”

Older brother John is manager for Used Fuel Systems in ORNL’s Reactor and Nuclear Systems Division and national technical director for the U.S. Department of Energy (DOE) Office of Nuclear Energy’s Nuclear Fuels Storage and Transportation Program. He leads applied R&D activities related to the safe storage and transportation of spent nuclear fuel. Previously, he served as technical lead for nuclear criticality safety — a field of nuclear engineering that focuses on the prevention of nuclear accidents — for the Yucca Mountain nuclear waste repository project, which was terminated in 2010.

DOE and external companies, like Ford and General Motors, to study high-performance engines and fuels by using supercomputing to solve the challenges of the future of transportation.

“We work to get you there faster,” he says.

The brothers won the lab’s Early Career Award for Engineering Accomplishment in back-to-back years. And though their technical areas don’t overlap, they still find time for an occasional lunch date.

“Oak Ridge gives us access to a combination of resources and interdisciplinary research that is not available anywhere else,” says John. There is a diversity and depth of expertise that makes this place unique.”