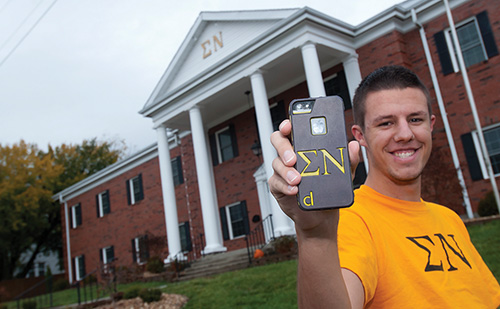 College students and alumni with iPhones may soon be able to show off their fraternity or sorority pride thanks to Connor Wolk, a sophomore in mechanical engineering, and his business partner, Taylor Jay, a student at the University of Kansas. The pair recently launched Dual Cases LLC to make lightweight yet sturdy iPhone cases that can be customized with Greek letters.

The company is one of four student-owned startups housed in the Student Business Incubator at S&T’s Technology Development Center, located in Innovation Park.

The idea for Dual Cases LLC was born in the summer of 2012, while Wolk and Jay were both working as interns for VMH International in their hometown of Chesterfield, Mo.

“We both had iPhones, and we talked about how all the cases (on the market) added a lot of bulk,” Wolk says.

So they came up with a two-layered case design — that’s the “dual” in the name Dual Cases. Wolk’s prototype, which he uses to protect his own phone, consists of a shock-absorbent rubber inner layer and a black plastic outer layer and sports the letters of his fraternity, Sigma Nu. The case is flush with an iPhone’s screen and fits snug against the phone’s beveled corners.

“You have five minutes to pitch your idea, then two minutes for Q&A,” Wolk says.