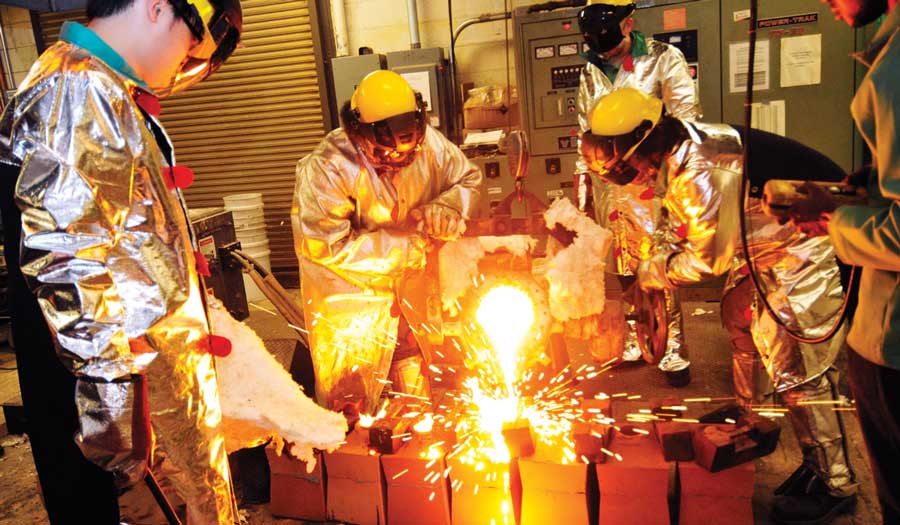 A new center for steel manufacturing research has been renamed to honor the legacy of the late Kent D. Peaslee, a metallurgical engineering professor who helped establish the center. The University of Missouri System Board of Curators approved the naming of the Kent D. Peaslee Steel Manufacturing Research Center at Missouri S&T during a board meeting last June.

Peaslee was S&T’s first F. Kenneth Iverson Chair of Steelmaking Technology and Curators’ Teaching Professor of metallurgical engineering. He died on May 17, 2013, at age 56.

“Kent was one of the nation’s leading authorities in steelmaking research, and he had the vision to establish this steel manufacturing center on our campus,” says Wayne Huebner, CerE’82, PhD CerE’87, chair of materials science and engineering at Missouri S&T. “He also worked diligently to obtain industry support for the center.

“After Kent’s sudden passing, the first order of business at the initial meeting of the center’s advisory board was a unanimous vote to honor his legacy by renaming the center in his honor,” Huebner says.

Peaslee helped raise more than $550,000 for the center from 12 companies, Huebner says. The center will bring those companies together with university researchers to address steel casting and manufacturing issues.