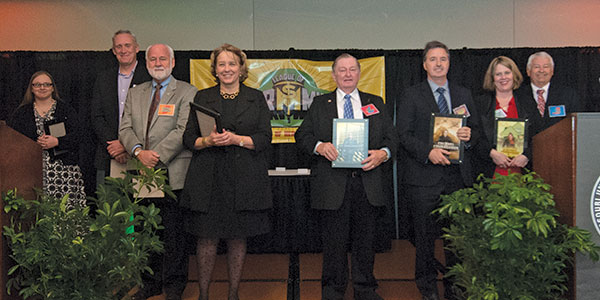 During Homecoming, the Miner Alumni Association honored a select group of “super heroes” for their accomplishments and devotion to the association and the university.

Selected from an impressive list of nominees, the “League of Super Miners” was revealed during the Miner Legends Luncheon on Oct. 18. Eight awardees were honored for their Super Miner achievements, volunteer work, dedicated service and outstanding teaching. Awardees were recognized at events throughout the weekend, including the Silver and Gold Gathering and the football game. Congratulations to the following award recipients:

Missouri S&T’s Super Miners were immortalized in a comic book, presented to guests at the Miner Legends Luncheon on Oct. 18.

Before the football game, nearly 300 Miner alumni and friends showed their superhero spirit at the tailgate party. Many sported green superhero capes.

More than 30 runners and walkers traversed the S&T campus on a chilly Homecoming morning as part of the first Super Miner 5K, held on Oct. 19.

Despite trailing much of the game, the Miners rallied in the second half to beat St. Joseph’s College at the university’s annual Homecoming football game. Mireille Paquette, a senior in engineering management from Chesterfield, Mo., was named S&T’s 2013 Homecoming Queen.