Right at home with P&G 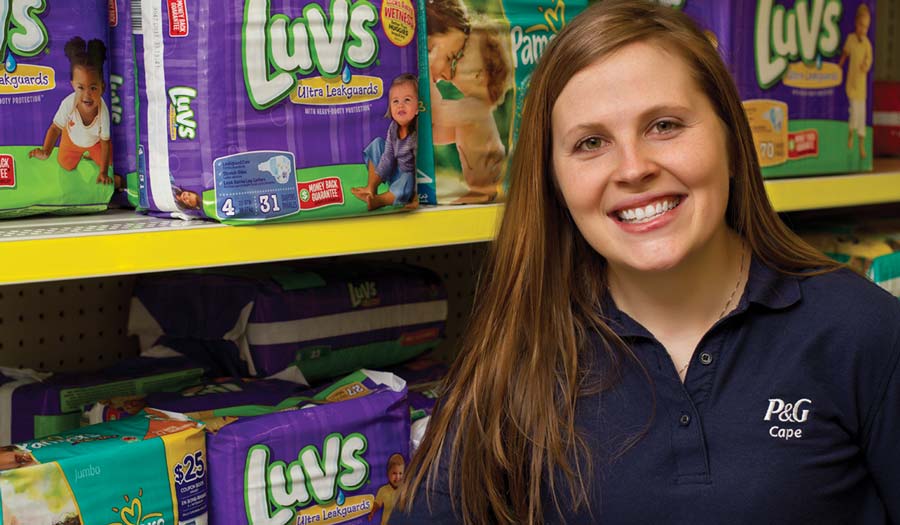 According to researchers at the Bureau of Labor Statistics, most American workers last four years with an employer. Katie Dambach, ME’06, defies that statistic. “I have never interviewed with another company,” Dambach says of her experience with Procter & Gamble. “I got the first internship and never looked back.”

Dambach, a manufacturing project leader for Pampers, acts as a liaison between her plant and others. Her workday includes preparing projects, making sure proper documentation is done, facilitating conference calls between “diaper design engineers” at various plants (both domestic and international), and troubleshooting the execution and assembly process. And while these job duties don’t necessarily sound like those of a typical mechanical engineer, she says her current position allows her to draw on her engineering background.

“School allowed me to learn mechanical troubleshooting, an ability and strength of engineers; it’s more about the process than design.” she says. “Because of that, engineers tend to be more mobile and progressive in their careers.”

Dambach was first introduced to P&G when she was invited to attend a Minority Technical Summer Camp in Cincinnati after her freshman year at Missouri S&T. “The next summer, I interned with Bounty Research and Development in Cincinnati,” she says.

Dambach returned to P&G for two additional internships, both times to the manufacturing site in Cape Girardeau, Mo., the same plant where she currently works. She and her husband, Travis, live in their nearby hometown of Jackson, Mo., with their toddler, Birkley. Dambach says her daughter gives her an invaluable perspective on her career.

“Not only am I a producer, I’m a consumer. Therefore, I really understand the need for the quality checks and all that goes into producing the diapers,” she says. “They have to be perfect because they are going on our most prized possessions — our babies.”

The amount of pride and dedication Dambach puts into her work is a direct reflection of what P&G puts into their employees.

“Our employees are our number one asset,” says Dambach. “Without them, there is nothing. P&G builds leaders and invests in their employees — they really care.”

For example, Dambach recalls running into the plant manager who hired her seven years earlier. He had since become a vice president, working in Cincinnati. “He came up to me and said, ‘Hi, Katie! How are you doing? How’s Travis?’”

P&G strives to maintain the family-friendly feel it was built upon more than 175 years ago. Headquartered in Cincinnati, P&G has production plants in more than 80 countries and consumers in more than 180 countries. The company now manufactures more than 300 products, from Crest to Tide, and at least one product is found in nearly every American household, according to a recent Wall Street Journal report.

“I love knowing that what we make improves our consumer’s lives every day,” says Dambach. “It’s pretty cool to be part of that.”