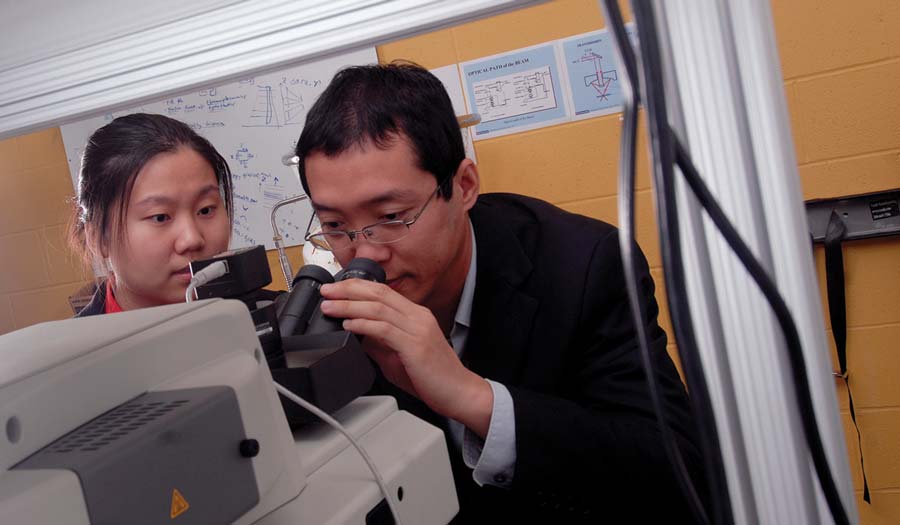 In a study that could lead to advances in the emerging fields of optical computing and nanomaterials, Jie Gao and Xiaodong Yang, both assistant professors of mechanical engineering, report that a new class of nanoscale slot waveguides pack 100 to 1,000 times more transverse optical force than conventional silicon slot waveguides.

The findings, which were published in the Sept. 24 issue of the journal Optics Express, could lead to advances in developing optical computers, sensors or lasers.

Gao and Yang describe the unusual optical and mechanical properties of nanometer-scale metal-dielectric structures called metamaterials. Using computers, they simulated nanometer-scale models of metamaterial slot waveguides, which are structures designed to channel beams of light from one area to another. Waveguides function like tiny filaments or the wires of an integrated circuit, but on a much smaller scale.

For their study, the Missouri S&T researchers simulated slot waveguides made of layered structures of silver and a dielectric material arranged like the alternating bread and meat in a club sandwich. A nanometer — visible only with the aid of a high-power electron microscope — is one billionth of a meter, and some nanomaterials are only a few atoms in size.

Gao and Yang simulated what would happen with modeled identical waveguides stacked with a tiny air gap between them. They then measured the transverse optical force between the waveguides. Optical force refers to the way beams of light can be made to attract or repel each other, as magnets do.