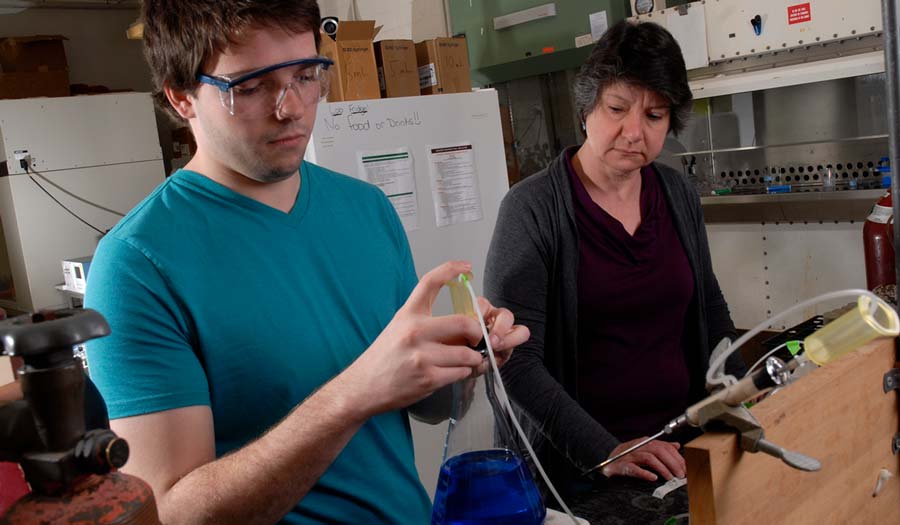 Using a microbe that thrives in extreme conditions, Melanie Mormile patented a process that could streamline biofuel production, making it less costly and reducing the reliance on fossil fuels.

Mormile, a professor of biological sciences, discovered a particular bacterium, called Halanaerobium hydrogeniformans, that thrives in high-alkaline, high-salt conditions. The bacterium can eliminate the need to neutralize the pH of the biomass, a step required in the alkali treatment of biomass to produce hydrogen fuel and other biofuels.

Mormile and her fellow researchers have been awarded two patents for developing a biofuel production process that uses the microbe.

The conventional method of biofuel production involves the steam-blasting of switchgrass and straw to separate lignin, an unnecessary byproduct, from the cellulose that is needed to create the biofuel. The process requires electricity, usually produced by either coal or natural gas, to generate the steam. That process releases considerable amounts of carbon dioxide while burning fossil fuels. The breakdown of the lignin produces compounds that inhibit fermentation and lead to lower hydrogen yields.

Treating the switchgrass and straw with an alkaline substance removes the lignin with limited formation of the harmful compounds, but the resulting slurry is highly alkaline and very salty. Before the discovery of Halanaerobium hydrogeniformans, a neutralization step was required before the fermentation process could begin. Using Mormile’s bacterium, that step can be eliminated.

“We realize this isn’t going to solve all the transportation fuel problems, but we’d like to see this develop into regionalized solutions,” Mormile explains. “Farm communities could take agricultural waste, perform the alkaline pretreatment, feed it to an onsite reactor and produce hydrogen fuel directly for use on the farm.”

Mormile studies extremophiles — life forms that exist in extreme conditions. The Halanaerobium hydrogeniformans bacterium used in Mormile’s hydrogen fuel production study came from Washington’s Soap Lake, which is unique in that it has not turned over in more than 2,000 years because of its high salinity. Its water has the same pH as ammonia and is 10 times saltier than seawater.