Aerospace team rockets to a win 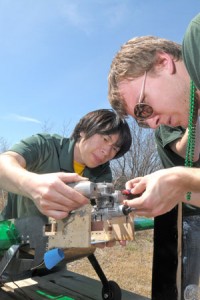 Despite crashing its first plane during testing, Missouri S&T’s Advanced Aero Vehicle Group won the Society of Automotive Engineer’s 2013 Aero Design East competition. Sponsored by Lockheed Martin, the competition was held in Texas in March at the Fort Worth Thunderbirds Flying Field.

The competition required the students to design and build an 8-pound aircraft capable of carrying a 15-pound static payload and a 3-pound “humanitarian aid package,” a sandbag that was to be dropped on a target from 100 feet in the air. Scoring was based on the sandbag’s proximity to the specified target.

S&T’s team earned first place in the presentation portion of the competition and third place in design. The team was in first place overall at the end of the first day.

No team in S&T’s class was able to successfully complete the flight portion of the competition. Teams struggled in the strong Texas winds and even after achieving liftoff, many vehicles crashed or failed to target the designated drop zone. With no points being awarded for the flight aspects, the Miners remained in first place.