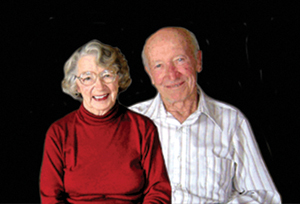 So following her husband’s death in 2009, Margaret and their three children — daughters Janet Olcott and Barbara Malone and son Bruce Olcott — contacted Missouri S&T to find out how they could honor Eugene’s wishes.

Janet learned from Wayne Huebner, chair of materials science and engineering, that her dad was originally an electrical engineering student who “switched majors to metallurgical engineering because the equipment
was better.”

“Janet thought that an equipment gift would be the most appropriate way to honor the memory of her father,” Huebner, CerE’82, PhD CerE’87, says.

The metallography laboratory in Huebner’s department was overdue for an upgrade. Students were using equipment from the mid-1980s — when the lab and its home building, McNutt Hall, were brand new — to polish and prepare samples for microstructural analysis with the department’s scanning electron microscope. “In order to prepare samples for analysis, they have to be polished to a mirror-like finish,” Huebner says.

Half of the lab’s 12 polishing stations no longer worked and students had to juggle their schedules to find time to work on their samples.

The $135,000 gift from Margaret Olcott replaced them all with a full set of state-of-the-art metallography equipment. It also paid for two automated polishers, which are used to prepare more difficult-to-polish materials.

“This gift will ensure that future generations of metallurgical and ceramic engineering students have the very best training in preparing samples for microstructural analysis,” says Huebner. “I’m very grateful to the Olcott family for their generosity.”

“The dedication was very moving,” says Janet. “The passion that the faculty and students share for their subject matter and their school is overwhelming. The reception was lovely, and we were particularly impressed by all of the time the chancellor (Cheryl B. Schrader), faculty and students dedicated to us.”

A native of St. Louis, Eugene L. Olcott worked as an engineer for the Navy and later for Atlantic Research Corp. as a high-temperature materials engineer on aerospace projects. In 1973, he and Margaret moved to a farm in Jefferson County, W. Va., to raise Angus cattle. He donated a 90-acre perpetual conservation easement from his farm on the Potomac River to the Potomac Conservancy and the Jefferson County Farmland Preservation Bureau.