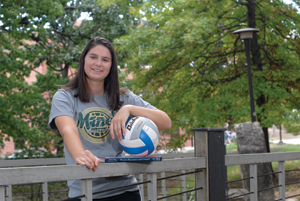 Jennifer Costello, a senior in chemical engineering from St. Louis, is the Capital One Academic All-America of the Year award winner for Division II volleyball as selected by the College Sports Information Directors of America.

Costello also earned first team honors last season. She has been named to the All-Great Lakes Valley Conference first team twice and has been named an Academic All-GLVC selection three times. She has won the M-Club Scholar Athlete Award for the last three years.

This past season Costello helped lead the Miners to their second-straight GLVC West Division title and to the semifinals of the conference tournament. She finished her career with 4,361 set assists, 923 digs, 444.5 points scored, 270 kills, 182 total blocks and 80 service aces.