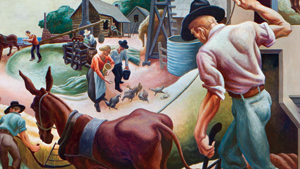 Muralist Thomas Hart Benton told the story of Missouri’s history in tempera paint on the walls of the House Lounge in the Missouri state capitol building.

Missouri S&T’s Jim Bogan brought the mural, and its creator, to life in his video Tom Benton’s Missouri. This past fall, the film was re-mastered in high definition and re-released to mark its 20th anniversary.

The film is available in a downloadable HD format with an educator’s guide that includes lesson plans for fourth grade through college, background information on the mural, and music from the film.

“We hope that seeing the film in high definition will be like looking through the eyes of a sensitive and knowledgeable spectator,” says Bogan, Curators’ Teaching Professor emeritus of art history and film.

Part of the restoration process involved refining the colors to make them truer to the original tempera of the mural. The film’s soundtrack was also enhanced. It features narration by Benton himself and historian Bob Priddy, as well as historical ballads written and sung by Bob Dyer.

Collaborators on the film restoration include Michael Hicks, film and video producer with the UM Extension Cooperative Media Group; Frank Fillo, co-director of the original film; Gerald “Jack” Brown, a senior in civil engineering at Missouri S&T; and Jessica Hicks, an art education student at MU.

Both the film and guide are available online at extension.missouri.edu/tombenton.