The chancellor is in the house 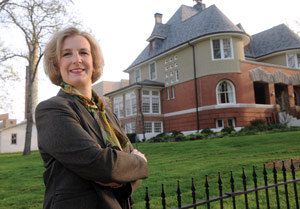 Cheryl B. Schrader (pictured outside the Chancellor’s Residence) began her new duties as Missouri S&T chancellor on April 2. Once on campus, she wasted no time representing the university to students, alumni and university leaders.

Schrader spent the afternoon of her first day meeting with students, faculty and staff. On the second day, she was with alumni in Jefferson City talking to key legislators. Just a few days later, she attended her first meeting of the University of Missouri Board of Curators. By the end of May, she had also been inducted to S&T’s Eta Kappa Nu honor society, met with the Missouri S&T Board of Trustees, attended several alumni gatherings, and presided over a groundbreaking ceremony for the campus’s new geothermal energy system.

Schrader was named chancellor on Jan. 19. A former dean of engineering at Boise State University and former president of the IEEE Control Systems Society, with more than 10,000 members worldwide, Schrader is one of the few female engineers to ascend to the top leadership position of a U.S. college or university. She is the 21st leader of Missouri S&T in the campus’s 141-year history.

“Cheryl has consistently been viewed as one of America’s best engineering teachers, and she’s also excelled in research and public service at the university, state, national and professional level,” says UM President Timothy M. Wolfe.

During the formal announcement in January, Schrader told faculty, staff and students that she is “deeply honored” to be selected as Missouri S&T’s next chancellor. “I choose to lead at institutions that are on the move,” she says. “Missouri S&T’s legacy and potential is truly remarkable. I see an innovative, results-driven academic and administrative leadership team — and very bright, capable students.”

Schrader will be featured in the Fall/Winter issue of Missouri S&T Magazine.