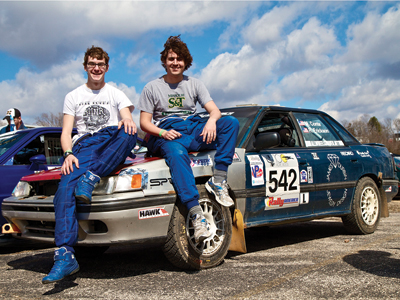 Reaching speeds upwards of 95 mph, Ron Erickson and Matt Conte raced their Subaru to a third-place finish in the open light class at the Rally in the 100-Acre Wood in February. The national championship performance rally in Salem, Mo., led drivers through the Ozarks wilderness over unpaved county roads.

“We weren’t as quick as we wanted to be,” says Erickson, IST’11, rally co-driver, or navigator, and a business analyst in Anheuser-Busch InBev’s information technology division in St. Louis. “Racing is really close, which makes it really cool. It’s all about skill.”

During a race, Erickson guides the driver, Conte, ME’10, over unfamiliar terrain. Some years, the drivers are plagued with mud. This year, the biggest obstacle was dust. It was unnerving, Erickson says.

“Knowing what’s over the crest is so important,” he says. “We had a lot of problems with dust. We really couldn’t see well.”

Erickson and Conte, best friends since their high school robotics team days, started backroading on weekends during the fall of 2006 when they were S&T freshmen.

“We didn’t know it was a sport,” Erickson says. “We just liked going out to explore Phelps County.”

They began as spectators at a rally race and then volunteered during races. Last fall, the pair raced in the Perryville Farm and Forest Rally in southeast Missouri.

“We came really close to rolling the car,” Erickson says. “We hit a steep ditch at 65 mph and the car came to rest on its side. No one was hurt — safety has come a long way.”

“We had the car prepared again for another event in the snow and ice of Atlanta, Mich., with a new engine, new suspension and the body work completed,” says Conte, who works for Boeing as a structural design engineer on the F-15 fighter jet. “Lots of body panels had to be replaced after that one.”

UPDATE Oct. 16, 2013:  Ron Erickson is competing to be the next Tested Inventern. If he wins, he will get to assist co-host Adam Savage’s assistant on an upcoming project. Check out his video submission at tested.com where he talks about building his own rally car from the wheels up.