North to Alaska (via Rolla) 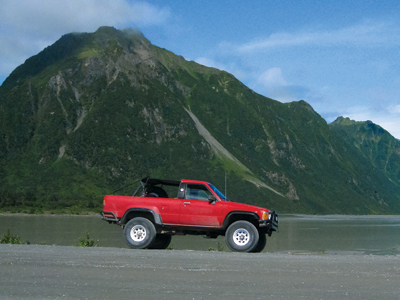 During college, Mullen liked to explore the back roads and trails of south central Missouri in the vehicle. One weekend, a couple of his buddies who were majoring in mechanical engineering helped him install a heavier suspension. In 2007, he got a summer internship in California’s Sierra National Forest. Of course, he drove the 4Runner all the way there.

“After graduation, I packed up all my belongings, installed an engine block heater, and drove it north to Alaska,” he says.

Now a staff geotechnical engineer for R&M Consultants, Mullen still drives his 4Runner around Anchorage and on adventure trips around Alaska. One of these trips included a drive to the Miles Glacier Bridge near Cordova, Alaska. Not to be confused with the infamous “Bridge to Nowhere,” this structure was built across the Copper River in the early 1900s for approximately $1.4 million. It was used to ship about $200 million worth of copper ore by rail.

“After graduation, I packed up all my belongings, installed an engine block heater, and drove it north to Alaska,” he says.

Although the bridge failed during the region’s 1964 earthquake (with a magnitude of 9.2, it was the strongest quake ever recorded in North America), it has since been repaired to allow for public vehicles — including one very well-traveled 4Runner.