Groovin’ in a Gremlin 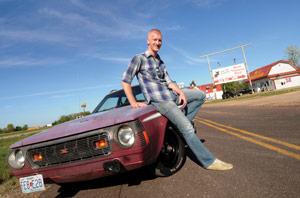 When he was 14, Carl Lacy found what would turn out to be his first car in a Kansas City junkyard. It was buried under lots of, well, junk. Lacy could only gain access to the gas cap, which had a little gremlin figure on it. He pocketed the cap.

After doing some research and saving some money, he went back and bought the whole car, such as it was, a year later.

The first concept sketch of the Gremlin was done by Richard Teague on a barf bag during a flight in 1969. The vehicle was officially introduced to the buying public on April Fool’s Day in 1970. It had a hatchback and was America’s first subcompact car. The Gremlin’s aerodynamic properties were engineered so poorly that, if it reached 140 mph, the rear glass would explode.

“So I built a Gremlin throwing flames out of its hood …”

The Gremlin from the junkyard is now Lacy’s parts car. He currently tools around campus at Missouri S&T in a different Gremlin, a 1974 model. And this one is purple. That’s right, a purple 1974 AMC Gremlin X. It has fewer than 64,000 original miles on it somehow. “I guess it sat outside a lot,” Lacy says. “The AM radio still works.”

He’s used to people yelling things at him when he’s driving around town in his odd car, but Lacy has a sense of humor about it. And actually, according to him, the Gremlin has good power and compares favorably in many ways to the old Volkswagen Beetle. “People either love it or hate it,” he says. “A lot of times I hear things like, ‘That’s one ugly car!’”

Lacy likes to tinker with cars and other things. He’s a senior studying to be a mechanical engineer. He recently made the finals in a Lego contest. “In the final round, we were asked to build something that we felt best described us,” Lacy says. “So I built a Gremlin throwing flames out of its hood. Then I lost.”