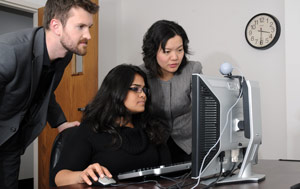 Nick Lockwood, assistant professor of business and information technology, Sneha Pochinapeddi, a graduate student in information science and technology, and Hong Sheng track the way our eyes move around a website.

As more people use the Internet to search for information, a user’s first impressions of a website can determine whether that web surfer forms a favorable or unfavorable view of that organization, according to researchers at Missouri S&T.

Eye-tracking research conducted by Hong Sheng, assistant professor of business and information technology, and Sirjana Dahal, MS IST’11, could help web designers understand which elements of a website’s design are most important.

Sheng and Dahal enlisted 20 Missouri S&T students to view screenshots of the main websites from 25 law schools in the United States. The researchers chose law schools because that degree is not offered at Missouri S&T.

After each viewing of a website, the students were asked to rate sites based on aesthetics, visual appeal and other design factors. “The longer the participants stayed on the page, the more favorable their impressions were,” says Sheng, whose specialty is human-computer interaction. “First impressions are important for keeping people on pages.”

Sheng and Dahal found that seven sections of the reviewed websites attracted the most interest from users: the institution’s logo, the main navigation menu, the search box, social networking links, the site’s main image, written content and the bottom of a website. The participants spent an average of 20 seconds on each website.

Although use of color was not part of the eye-tracking study, participants indicated that it did influence their impressions of websites. The use of images was also found to be an important factor in web design. “You must choose your main picture very carefully,” Sheng says. “An inappropriate image can lead to an unfavorable response from viewers.”