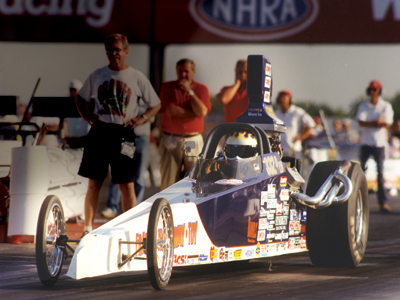 Bob Toy, ME’72, and his racing team set a national record in their dragster in 1997. (Photo courtesy of Auto Imagery Inc.)

Toy’s passion for drag racing developed long before he came to Rolla in 1967. “I became aware of mechanical engineering at 15,” he says. “From that point on, there was no question what I wanted to do.”

Now an information technology supervisor with West Lake Co. in Calvert City, Ky., Toy says nearly everything he learned in his classes had racing applications. He likens successful drag racers to “someone in the lab doing R&D — just finding out how to get from point A to point B quicker.”

After years of racing on his own, he formed a partnership in the 1990s with two friends, Gordon Holloway of Memphis and Gary Frantz of Louisville, Ky.

With Frantz’s son, Todd, as driver, their car raced from 1995 to 1998, originally with a 285-cubic-inch Chevy V-8, and the last two years with a 262-cubic-inch Chevy V-6. In 1997, it set a national record in the D/Econo Dragster class at Quaker City Dragway in Salem, Ohio, with an elapsed time of 7.62 seconds, topping 171.42 mph. That year the car also finished seventh in the world in overall points and won the Competition Eliminator title at the National Hot Rod Association’s U.S. Nationals in Indianapolis.

“It was a perfect bluebird day on Labor Day weekend,” Toy recalls. “We were sitting there waiting for our turn to be interviewed by ESPN. My partner Gary said, ‘I don’t care if this day ever ends.’”

It turned out to be Toy’s last race. “What we accomplished took the killer edge off me. God let me play out my fantasy,” he says.